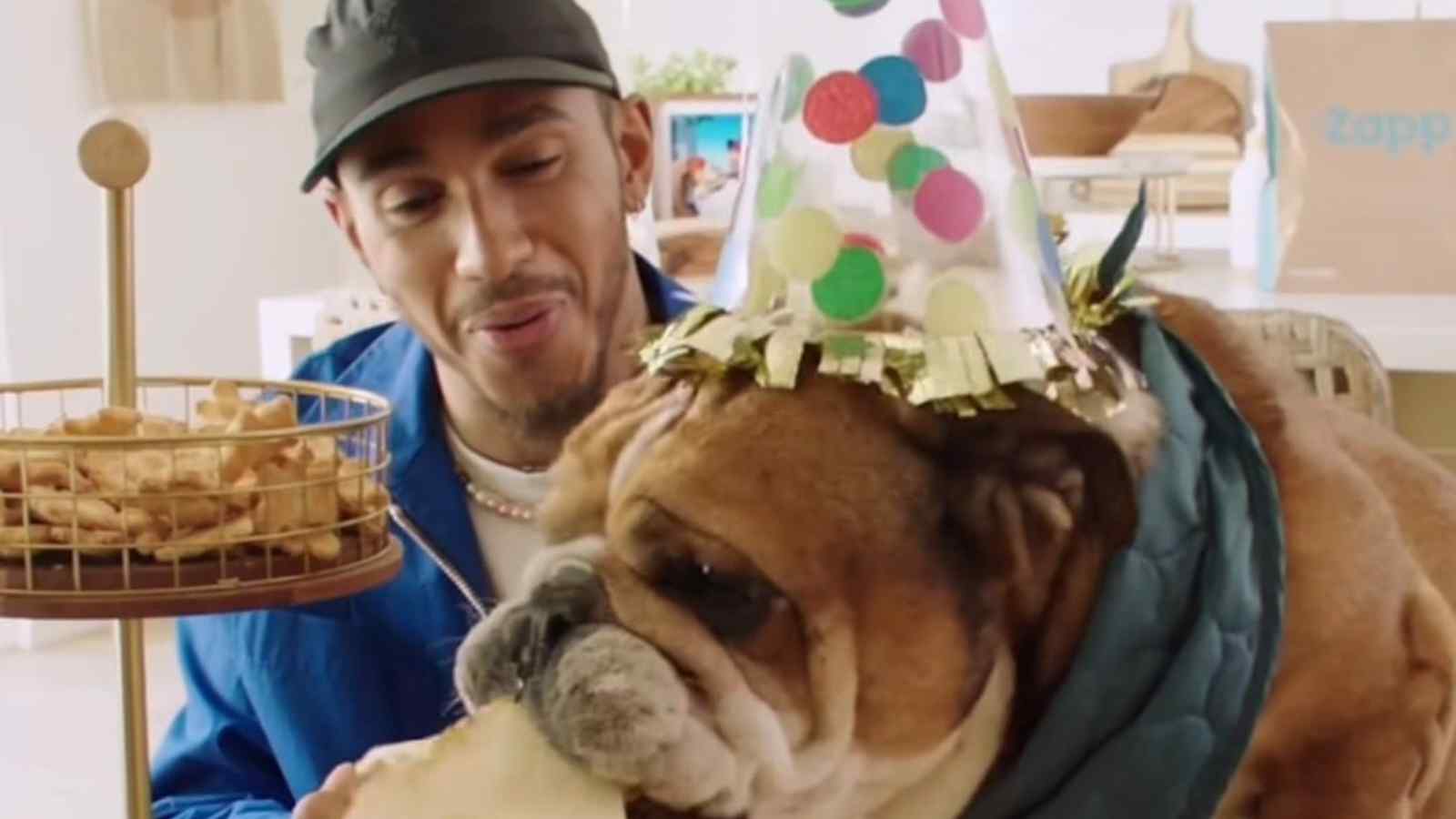 Lewis Hamilton and Roscoe take part in an adorable commercial

Lewis Hamilton and his favorite companion, Roscoe are one of the most iconic duos in the Formula 1 paddock. Roscoe is a regular visitor to the races, being a special guest at the Mercedes garage. The bulldog is a start in its own right, with a healthy vegan lifestyle following his world champion ‘dad.’ The star has a stellar following on social media with over 600k followers on Instagram. Thus, this cute fellow is always busy with endorsements, just like the 7-time world champion. Recently the 9-year-old did another commercial with dad Hamilton.

The advertisement was for the startup Zapp, an online delivery service. The video showcases the bulldog snoring peacefully, with a face time call by the Lewis waking him up. The British driver champion informs his partner about coming back home early but requests Roscoe to not do something extravagant, saying, “Please please don’t make a fuss okay? I’ll see you soon.” The doggo however ignores the suggestion and proceeds to make a fuss. The refrigerator turns out to be empty and the decorations box was not adequate either.

This forced Roscoe to put on his glasses and look for the groceries on the app, which were delivered in 8 minutes. The deliveryman too was delighted to witness his lovable customer. However, there was no time for friendly chit-chat as the bulldog rushed to get everything in place, from pouring the popcorn to hoisting the ‘Welcome Home’ sign. As Lewis enters, he is astonished by the effort his companion has put to give him a heartfelt welcome after a long season in F1.

Hamilton expressed his surprise and exclaimed, “What is this? You did all this for me?!” The 37-year-old then excitedly invited his dog to his arms, chanting, “Come here, buddy.” The video then portrays the two enjoying their time together as the two had the delicacies prepared by Roscoe, made possible by his last-minute grocery order. Lewis thanked the 9-year-old and said, “This is the best party ever.” Certainly, this commercial was enough for anyone to adore the love the two have for one another.

Instagram was all over the cuteness of Lewis Hamilton’s bulldog, with fans mentioning how cute and adorable they found the reel to be. One user commented, “Cutest video ever!!!” while another fan stated how they could not stop watching the video, replying, “‘How many times have you watched this?’ Me: ‘Yes.'” Users loved the acting of Hamilton junior with one fan stating, “Love the expression when finding the fridge empty.”

Fans demanded an Oscar for the acting of the doggie, with a user stating how Lewis’s pet too is just a winner like him, the fan replied, “It’s not enough for the father to have 8 [7] world titles, the son also has to take home Oscars.” while another fan commented, “Where is the Oscar for Roscoe???” One fan even suggested giving a raise to the person who thought of this commercial idea. Perhaps the bulldog really does have a future in Hollywood?

This video was wholesome for the fans and must’ve been an exciting one for the Dad and son Hamilton, having a fun time together while also being paid. Hamilton just finished a struggling 2022 season in Formula 1, his first winless year in the sport since his debut in 2007, as such the 37-year-old would be looking to spend some good time cuddling with his son, and making some good memories in the winter break before the hectic F1 season begins again.