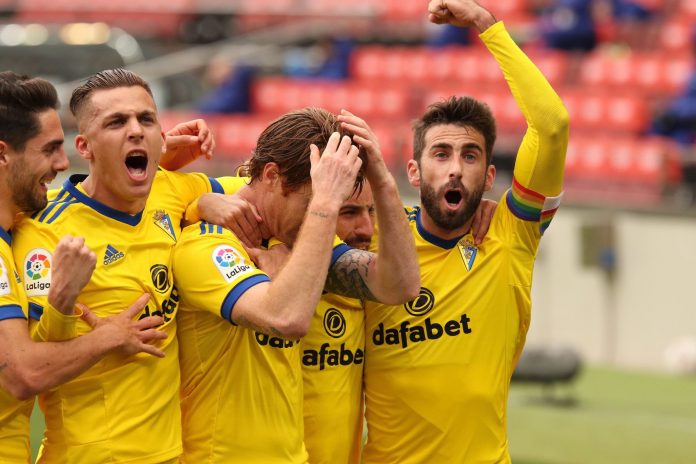 FC Barcelona missed their chance of keeping up with Atletico and Real Madrid at the top of the table. FC Barcelona conceded a late equalizer against Cadiz and missed out on 2 valuable points.

Atletico Madrid lost 2-0 against Levante at home in their recent fixture and a win for the Blaugranas would have reduced the deficit to only 3 points. Messi scored a first half penalty but Alex Fernandez scored from the spot in the 89th minute to equalize.

The Catalans created a flurry of chances in the second half but were unable to seize the initiative at the Camp Nou. Defensive blunders have been a highlight of Barcelona’s season under Ronald Koeman and Clement Lenglet lived up to the billing by conceding a late penalty to offer Cadiz a lifeline.

“It’s disappointing,” the Dutchman told his post-match press briefing. “These kind of games have to be won and we didn’t do it.

“It’s a big opportunity lost after the Atletico Madrid defeat. It’s a big disappointment. I’m very disappointed, more so than last Tuesday. We couldn’t let the two points slip away. We are disappointed.

“I don’t like to blame the players individually. We weren’t up to the task in attack, and we have to defend differently. In terms of quality, we should have won.

“The problem is that the scoreline was very close and they could equalize at any moment, as happened.

Barcelona are now third in La Liga and trail Atletico Madrid by eight points. Furthermore, they are five behind Real Madrid, although the capital side have played a game more. Barcelona can slip to 4th in the La Liga table if Sevilla manage to win against Osasuna tomorrow.