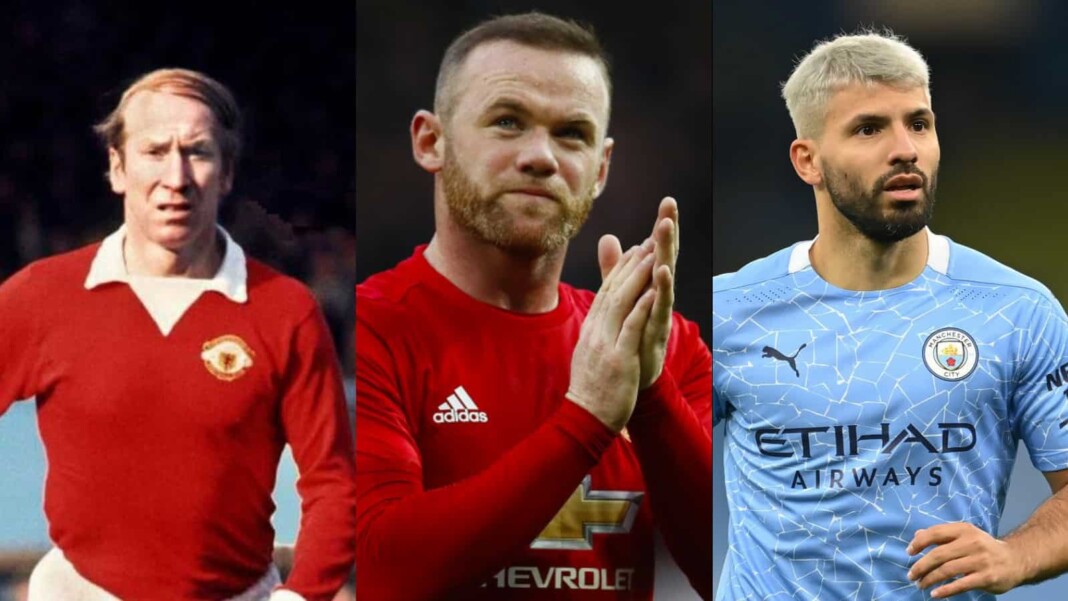 The Manchester derby is one of the biggest matches played in Europe, as the two neighbouring sides go head to head in order to secure bragging rights over their rivals. The Manchester derby is one of the oldest in football, having started way back in 1881. While Manchester United have had the major share of success in the past, the Blue of Manchester City have started to unfold their wings and look destined for great things in the coming years, which sets us up for better and a greater rivalry between these two sides in the future.

Over the past years, certain players have stamped their mark on the game more than others, and we take a look into the top 5 goalscorers in Manchester Derby.

Out of Sir Bobby Charlton’s 249 goals for United, 9 came against their rivals City which earns him the third position in the top goalscorers of the Manchester derby.

The United legend is joined by a modern Manchester City legend, Sergio Aguero who has taken the Premier League by storm since joining the club in 2011. He is City’s record goalscorer with 260 goals from 390 appearances and 9 of the massive tally came in the highly esteemed Manchester derby. His last goal for City in the Manchester derby came in 2018 which they won 3-1.

Two of Manchester City’s legends Joes Hayes and Francis Lee hold the second position in the highest scorers’ list of the Manchester derby. Joe Hayes’ best moment in a Manchester City shirt was in 1956 when he helped the club win the FA Cup. He scored 142 goals in his 332 appearances for the club, which spanned over 12 years.

Francis Lee became Manchester City’s record club signing in 1967 and the English striker paid them back every ounce in the following 8 seasons, which he stayed on at the club. He played a total of 249 matches in the blue shirt of Manchester and scored a massive number of 112 goals in them. He also scored 10 goals in the Manchester derbies at a time when United were almost at their peak in terms of football. The Manchester City duo held the record for the most number of goals in the mAnchester derby for over 40 years until 2013 when it was broken by a rival player.

It should come as no surprise that Manchester United legend, Wayne Rooney holds the top spot in the list of highest goalscorers in the Manchester derby. Wayne Rooney spent 13 seasons at the Theatre of Dreams scoring a total of 253 goals, which made him the club’s greatest goalscorer.

Among those goals, he scored 11 against United’s eternal rivals Manchester City, with the last of them coming in the disastrous 4-1 defeat in 2013/14. However, he scored the consolation goal for the Red Devils and became the player with the most goals in the Manchester derby. Arguably, his best goal against City came in 2011, when he scored a stunning bicycle kick to earn all the plaudits in United’s close 2-1 victory under Alex Ferguson.

Also Read: “He’s one of the best players that’s ever walked on this planet,” Ole Gunner Solskjaer’s …