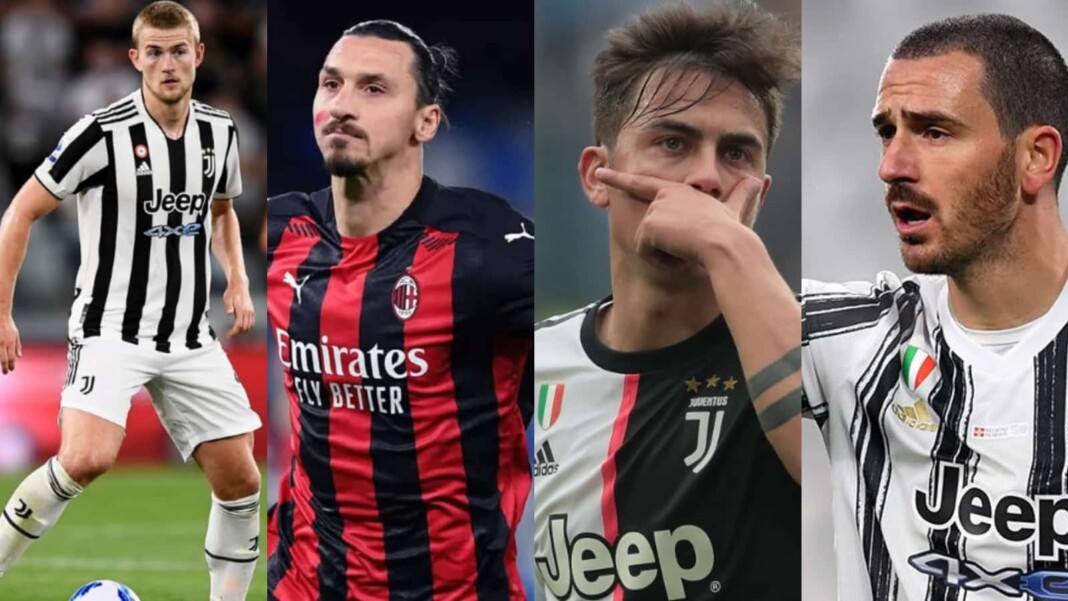 The Italian league is home to some of the best players in the World, with most recently Cristiano Ronaldo playing in the league for three years until he left for Manchester United this season. Despite losing one of the star attractions in world football, Serie A continues to enjoy a huge fan following from all over the world.

In this article, we take a look at the highest paid players in Serie A.

The Juventus midfielder, Adrien Rabiot comes in at number 10 of the list of the highest paid players in the Serie A this season. The Frenchman earns around £187k in weekly wages, in his new contract. His yearly earnings at the club amount to a total of £9.7 million each season. Rabiot signed for the Old Lady in 2019 on a free transfer from Paris Saint Germain and has gone on to make 89 appearances at the club to date, scoring 6 goals in Serie A.

Another Juventus midfielder joins the list of the highest paid players in Serie A. Aaron Ramsey signed for Juventus in 2019 from Arsenal on a free transfer. The Welshman signed a huge contract that sees him pocket around £187k in weekly wages, similar to Adrien Rabiot. He also earns a total of £9.7 million each season. He has made a total of 68 appearances for the club, in what has been a poor stint at the club for the former Arsenal man.

Zlatan Ibrahimovic is still going strong as a footballer at the age of 39. The Swedish striker brings with him a whole lot more and has rejoined his former club AC Milan in 2020 and continued his streak of scoring goals for fun for the Rossoneri. In his 38 appearances for the club, he has netted a whopping 29 times and does not look like slowing down anytime soon. Financially, he pockets a total of £9.72 million yearly, which makes it around £187k in weekly wages.

Chilean striker Alexis Sanchez also features in the list of the highest paid players in Serie A, after he joined Italian giants Inter Milan. He had a torrid spell with Manchester United and joined Inter to recover his glory days but the move has not paid off for him. Sanchez has struggled to stay fit and consistently perform at the club, a sight which we were used to seeing during his Manchester United days. Despite his struggles in the pitch, he pockets around £9.72 million yearly, to make him one of the highest earners in the league.

Juventus has yet another representative in the highest earners list in their left-back Alex Sandro. The Brazilian has been one of the mainstays of the club in the past couple of years and has made the position his own for the Old Lady. Sandro joined Juve in 2015 signing a 5-year contract that will expire at the end of this year. The contract sees him earn £9.72 million yearly. He has made more than 200 appearances for the club and was an integral member of their title-winning side from 2015-2020.

Wojciech Szczesny finds himself in a higher bracket of wage and comes in at number 5 in the highest earners list in Serie A. The Juventus goalkeeper has finally nailed down a number 1 spot for himself, after years of playing second fiddle to Gianluigi Buffon. Szczesny is among the highest-earning goalkeepers in the World and pockets about £211k a week, which amounts to £10.9 million yearly for the goalkeeper.

The Italian defender, Leonardo Bonucci is one of the best defenders in Europe and has proven his credentials in the Italian league after signing for Juventus in 2010. He won the Serie A for 7 years in a row with the Old lady, before moving onto their rivals AC Milan in 2017. Bonucci has made a total of 438 appearances in the Italian league and is one of the poster boys of Serie A. He a signed new contract with Juventus in 2018, which earns him a whopping £11million in wages every year.

Paulo Dybala is one of the star attractions in Serie A, and the Argentinian made the move to Italy in 2012, joining Palermo. He played for them till 2015, before Juventus came calling and he joined them for a fee of €32 million. He has blossomed into one of the best attackers in Europe and has won 5 league titles with the club. He has made 352 appearances during these 9 years in Serie A. Given the amount of talent this man has, it is no surprise that he earns £12.3 million annually and is among the top three earners in the league.

Christian Eriksen is second in the list of highest paid players in the Serie A and earns almost £12.6million yearly. The attacking midfielder joined Inter Milan in 2020 from Tottenham Hostpur. However, his move to the Italian side has not paid off dividends for the Danish midfielder, as he found it hard to get playtime under Antonio Conte, who had publicly made it clear he was not part of his plans. He suffered a cardiac arrest in the EURO 2020 this summer and has not taken the pitch since, although he has recovered from the issue since.

Matthijs De Ligt is regarded as the next big thing in Italian football and has made giant strides in the game just at the age of 22. He came to notice in Ajax’s record breaking season in 2018, and Juventus made the move to sign him for €75 million, making him sign a 5-year contract with the club. In the three seasons since then, he has made 81 appearances for the club and scored 6 goals. The defender is the highest paid player in Serie A, and reportedly earns around 13 million pounds annually, which makes it a weekly salary of £250k.

Also Read: Ranking the 10 best players in Serie A currently