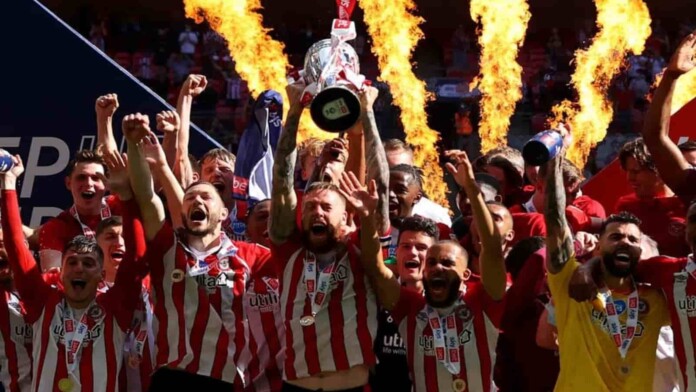 What a season it has been for Brentford. From uplifting from the previous season’s disappointment to the glory in 2020/21, Brentford have a come long way. Finally, their longstanding efforts have been rewarded on Saturday after they were promoted to the English top-flight with a win over Swansea. At Wembley, the Bees defeated Swansea 2-0 to make it to the English Premier League 2021/22. With the victory, Brentford have earned £180million and can earn up to £265 million if they avoid a drop from the Premier League. The Bees will join Norwich City and Watford in the English Premier League.

How did the game pan out for Brentford?

The Bees started the game on a great tempo by creating loads of chances in the initial minutes of the game. The team was yet to overcome the scar that Fulham had etched in Brentford’s mind. Swansea crumbled under the pressure and gave away the 10th-minute penalty. Ivan Toney slotted past the Swansea shot-stopper to make it 1-0.

Brentford did not rest after the first goal. The counterattack in the 20th minute resulted in the second goal. Emiliano Marcondes scored the second goal for the Bees and that was enough to seal their place in the English Premier League. Though Swansea tried to pull one back in the first half, their efforts went in vain against the resilient outfit.

In the second half, Swansea seemed to be a determined outfit but the red card to Jay Fulton in the 65th minute spoiled Swansea’s plans. Brentford held the fort later on to join the elite clubs for the 2021/22 season.

Swansea manager, Steve Cooper was dissapointed after the defeat. Talking to the media, he said:

With the win, Brentford broke the curse and will join the Premier League for the first time in their history. Bees failed to win the play-off finals on nine occasions before winning against Swansea. The club will feature in the first top-flight game since 1946/47.