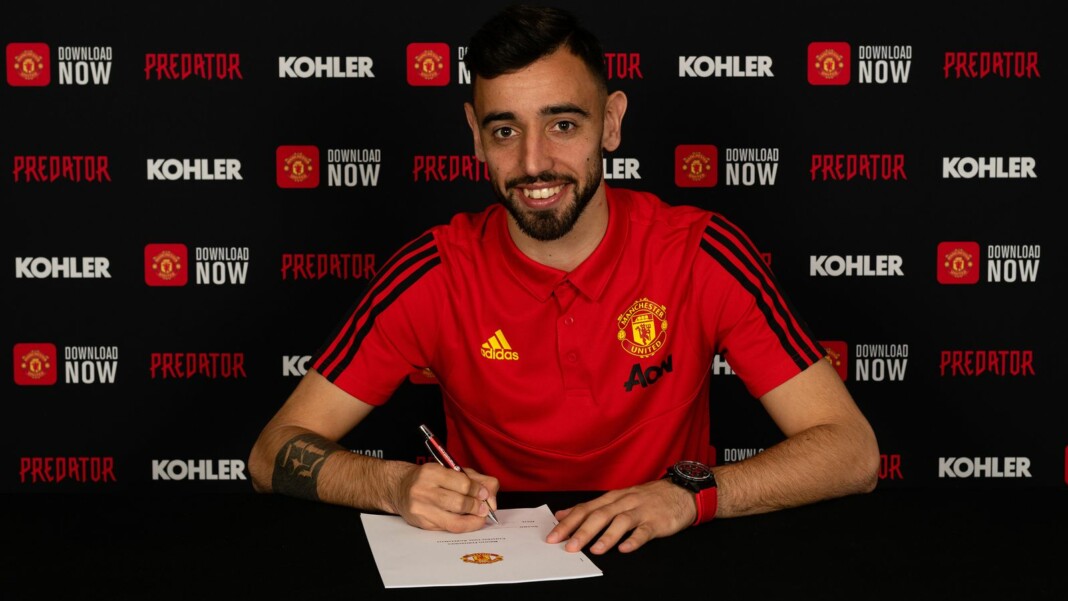 The midfielder has been a revelation at his new club and within a short period of time, has established himself as one of the best players at the club. The 26-year old midfielder is most suited in the No. 10 role and is the creator and scorer in chief for Ole Gunnar Solskjaer’s side and has had a huge impact on the performances of the Red Devils in the past couple of years.

Bruno Fernandes net worth is currently estimated to be around the €7 million mark in 2021. For a footballer of his class and pedigree the figure is not a huge sum by any means, however these figures are bound to rise in the future if he continues to put in electric performances for his side in the Premier League.

Bruno Fernandes net worth in 2018, when he used to play for Sporting Lisbon in Portugal was reported to be around €2 million. However, since making the big money move to the Premier League his stocks have risen significantly and is bound to skyrocket further in the future.

Bruno Fernandes signed a 5 and a half year contract with Manchester United in 2019 during his €55 million move from Sporting Lisbon. The footballer signed a contract which sees him pocket whopping salary of 3 Million Euros per year. His weekly wages stand at around €250k making him one of the bigger earners at Manchester United.

Bruno Fernandes is happily married to his childhood friend Ana Pinho. The duo have known each other since childhood as they used to study in the same high school in Boavista. The couple tied the knot in 2015 after several years of dating and are also parents to a beautiful daughter named Matilde Fernandes and a son who was born recently in 2020 named Gonçalo Fernandes.

Bruno Fernandes only has only endorsement of note to his name, which is with the sporting goods manufacturer NIKE, who sponsors his footballing boots. He wears the Nike Mercurial Vapor 14 boots for his matches.

Bruno Fernandes started his professional career as a senior player playing for Italian side Novara in 2013, but soon made a move to Udinese who are regulars of the Serie A in Italy. He played there for 3 years, before making a loan move to Sampdoria in 2016. However, the move did not work out for the Portuguese medio and he was shipped off to Sporting CP where his career took off and he started getting his due praise. Manchester United noticed the potential in him and snapped him up in 2019 making him sign a 5 and a half-year contract in a move worth about €55 million.

Since his move to the Premier League, Bruno has made a total of 74 appearances in all competitions and has scored a whopping 40 goals playing as an attacking midfielder. He won the Manchester United Player of the Year award this season as he propelled the Red Devils to a second place finish in the Premier League.

What is Bruno Fernandes Net Worth?

Bruno Fernandes net worth is estimated to be around €7 million which is a lot less compared to other footballers of Manchester United.

What is Bruno Fernandes Salary?

Bruno Fernandes earns 250,000 Euros per week and has a yearly salary of 3 Million Euros.

What is Bruno Fernades Age?

Bruno Fernandes was born on 8 September 1994, and is currently 26 years of age.