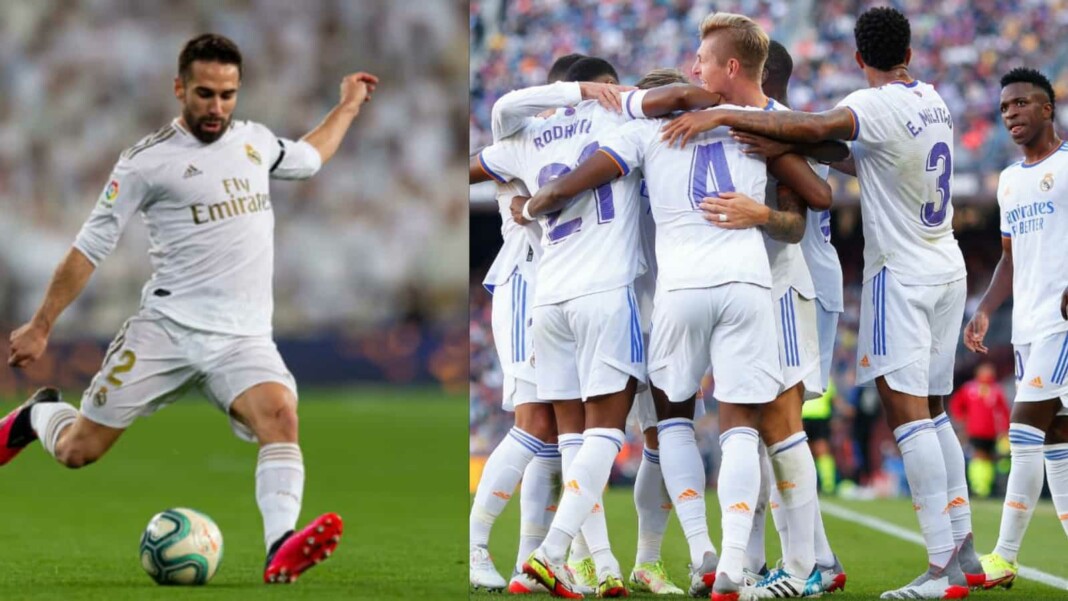 Real Madrid have made a rollicking start to the 2021/22 season under Carlo Ancelotti and a massive reason for that has been the improvement in the attacking front this season in contrast to the previous years. The partnership between Karim Benzema and Vinicius Junior has blossomed and the duo have made things life easier for Real Madrid, and the other players in the squad.

Real Madrid’s right-back, Dani Carvajal has applauded Vinicius for his part in the success, and given the performances, the Brazilian has shown it is the least he deserves as well.

In an interview with Spanish news outlet MARCA, Dani Carvajal pointed out the aspects which Vinicius has done right this season and also hailed him as the most in-form player in the entire Real Madrid squad.

“He’s like a rocket, he’s flying. He is helping us a lot: he comes short, he goes long, he’s scoring goals. He is the most in-form player in the team. And an example of mental strength. He was criticised a lot for his lack of goals, for his lack of accuracy. And what he did was put everything on his back and keep moving forward,” Carvajal said.

After joining the club in 2018 as a prodigy, the youngster was touted to become one of the best in the world. However, the move did not work out well in the first two seasons, and Vinicius was often criticised for his poor decision making and shooting in front of goal. His goal tally stood at a meagre 6 goals in the first two seasons, and a lot was left to be desired of his performances.

Vinicius has changed all of that this season, with his outstanding goal scoring form, wherein he has scored seven goals in the first 11 matches in La Liga, outdoing his overall goal tally from the past two seasons. He has also scored 2 goals in the Champions League, both of which came against Shakhtar Donetsk in a 5-0 victory for the Los Blancos.