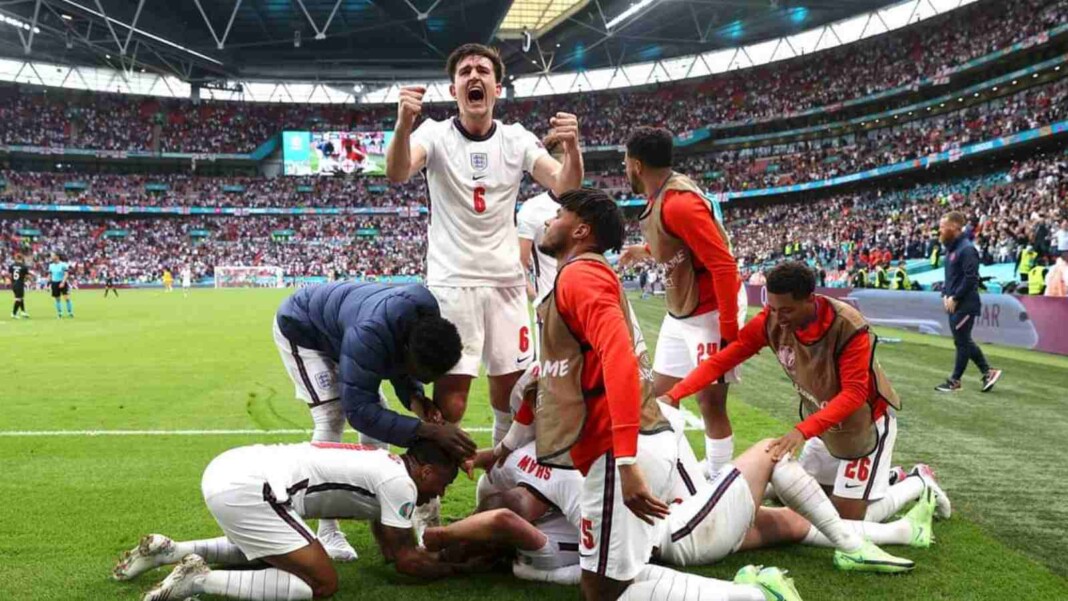 England have finally defeated Germany in the knockout stages of an international tournament and are headed towards the quarter finals of EURO 2020, courtesy of a 2-0 win over Germany. Raheem Sterling and Harry Kane scored the deciding goals for the Three Lions as Germany were largely ineffective in attack throughout the match.

Here are our player ratings of the EURO 2020 England vs Germany Round of 16 match.

Made some good stops and was on point with his distribution as well, but had nothing much to stop the German goals, which were almost tap-ins.

Expressed himself on the pitch like most days, and tried to keep out Saka in the first half and was sloppy in his passing.

Earned himself a yellow card in the first half for a challenge on Sterling and would have missed the quarter finals if his side had won.

Made his presence felt in the first half denying England from corners and dead-ball situations. Dominated Harry Kane completely but the striker got ahead of him on the scoring chance and scored.

Was mostly pinned back in defence and his role as a wing-back was not really justified. Had little time on the ball. Had a tough time with Shaw and Sterling doubling up on him.

Looked the likeliest German player to score and made runs from inside his own half to drive the attacks for his side. His powerful volley in the first half was denied by Pickford.

The midfield maestro was his calm, composed self throughout the match picking out passes with precision but provided little threat going forward.

Played ahead of Gungogan in midfield after his stellar performance against Hungary, the midfielder did not provide much threat going forward.

Did not impact the game much especially going forward.

Made his attacking runs in the first half providing Germany a different type of focal point. However, continued his poor form in front of goal by missing a good chance.

Missed a golden chance towards the end of the match, which could have brought Germany level at the time and was largely invisible throughout the match.

Made a number of fine saves to deny Germany and was confident with his distribution, had command over his penalty area. Justified his positition as England’s No.1 once again.

Played at centre back and did a good job cutting out the attacking runs from Mueller and Werner.

Denied Werner a brilliant chance on goal, by sticking with him till the last minute and was solid throughout the heart of defence.

Decent performance from the centre-back but failed to cover Kimmich’s run in the final moments of the match and picked up a yellow for challenge from behind.

Provided the assist for England’s first goal and was a constant threat down the left hand side playing at left-win back.

An error free match from the defensive midfielder playing as one of the pivots in a double pivot system. Slowed the game down in the first half and allowed his side to get a hold of the game.

His challenge on Toni Kroos earned him a yellow card, but made progressive passes throughout looking to keep most of England’s attacks alive instead of just holding onto the ball.

Had an excellent match and was equally good going forward and defensively.

Looked lively throughout the match and justified his selection in the starting line-up. Played an excellent match and was the main creator for England in the first half.

Finally broke his goal voodoo for England in EURO 2020 by scoring the all important second goal to put the game beyond bed. Looked more involved in the second half.

Scored the opener for England and worked hard throughout the match. Gave the ball away in the final moments of the match which allowed Mueller through on goal, but he missed his shot.

PLAYER OF THE MATCH-

Also Read: Euro 2020 Sweden Vs Ukraine Live Stream: When, Where and How to Watch