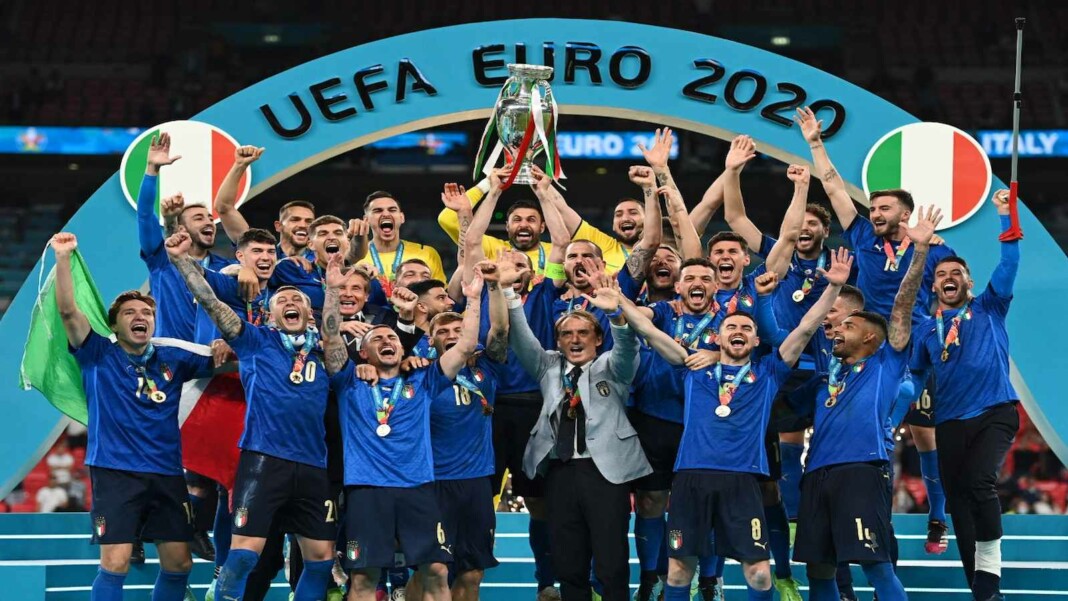 It has finally come to ROME!

The biggest spectacle of European football has finally seen its final act been played out for the 16th edition. The two teams playing in the final have delivered an excellent display of football at Wembley with the Italians clinching the EURO 2020 title on penalties.

The match finished 1-1 after the regulated 90 minutes after Leonardo Bonucci scored Italy’s equalizer in the second half. England took an early lead inside the first 3 minutes of the match from an unlikely source in Luke Shaw.

Donnarumma -7/10- Pulled off 3 crucial saves in the penalty shootout and earned the plaudits of one and all for his command inside his penalty box during the normal time.

Bonucci- 8/10 – Was exceptional in defense calming his teammates down whenever the English team had a good spell with the ball. His biggest impact however came at the other end of the pitch when he bundled in Italy’s equalizing goal in the 67th minute of the match.

Jorginho- 7/10 A decent match from the midfielder who looked to have injured himself in the first half. Took most of the possession but earned himself a yellow card towards the end of added time for a reckless challenge on Jack Grealish. He missed his final spot kick to give England a chance back into the game.

Verratti; 7.5/10- An ever present figure in the middle of the park, harried down the England midfielders and won back possession for his side expertly.

Chiesa- 8/10 Probably the best player on the pitch for the Italians and looked a constant threat for the Three Lions before he had to be subbed off for an injury.

Pickford-8/10 Made a number of stops inside the normal time and even kept England in the game by saving what was supposed to be Jorginho‘s winning penalty of the match. A bad result for the goalkeeper who tried his level best.

Trippier 7/10- Delivered the assist for England’s only goal of the match, and looked perfectly suited to the England team after making a comeback under Southgate for the finals.

Rice, 7.5/10- He was outstanding in the middle of the park, carrying the ball out from the back with immense poise and control and was probably England’s best player on the pitch before being subbed off for Henderson in the 70th minute.

Shaw-7.5/10- Scored England’s goal with a sumptuous volley and linked up well with Sterling on the left hand side as he has done throughout the entirety of EURO 2020.

Sterling 6.5/10- Made a few runs into the box, but fell to the ground too many times whenever a player touched time, so much so that the referee hardly blew for his devious tricks.

Also Read: Awards in COPA America 2021: Who bagged the most awards?