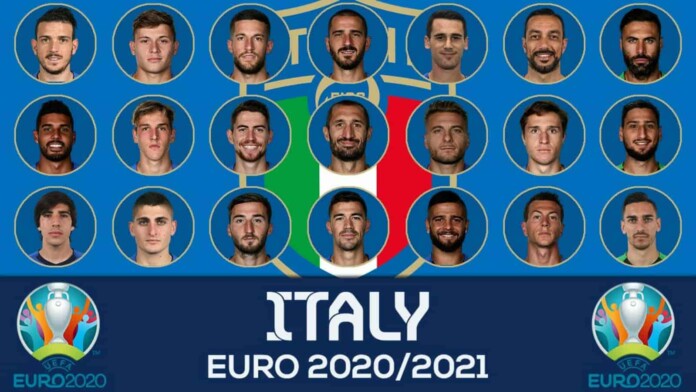 Italy manager Roberto Mancini named his 28-man Italy squad for the upcoming European Championships this summer. Euro 2020 starts on 11th June and Italy start their campaign on the first day itself against Turkey in the tournament opener.

Mancini has cut out big names in Moise Kean and six others from his preliminary Italy squad. He named both Jorginho and Emerson who were recently involved in the Champions League final victory for Chelsea.

A further of two players will face the cut when Mancini names his final 26-man on June 1st. Paris Saint-Germain striker Moise Kean was the biggest name to be dropped by Mancini, who has kept Marco Verratti and Inter Milan midfielder Stefano Sensi despite the duo being injured.

Italy will once again depend on the experienced albeit ageing duo Bonucci and Chiellini to shore up things for them at the back and lead them to a successful Euro campaign this time around.

Italy have been placed in Group A alongside Turkey, Wales and Switzerland. They play their matches on 11th, 16th and 20th of June in the group stages. A qualification into the knockout stages looks likely for a strong Italy squad this time around.

Also Read: Argentina ruled out as hosts for the Copa America 2021