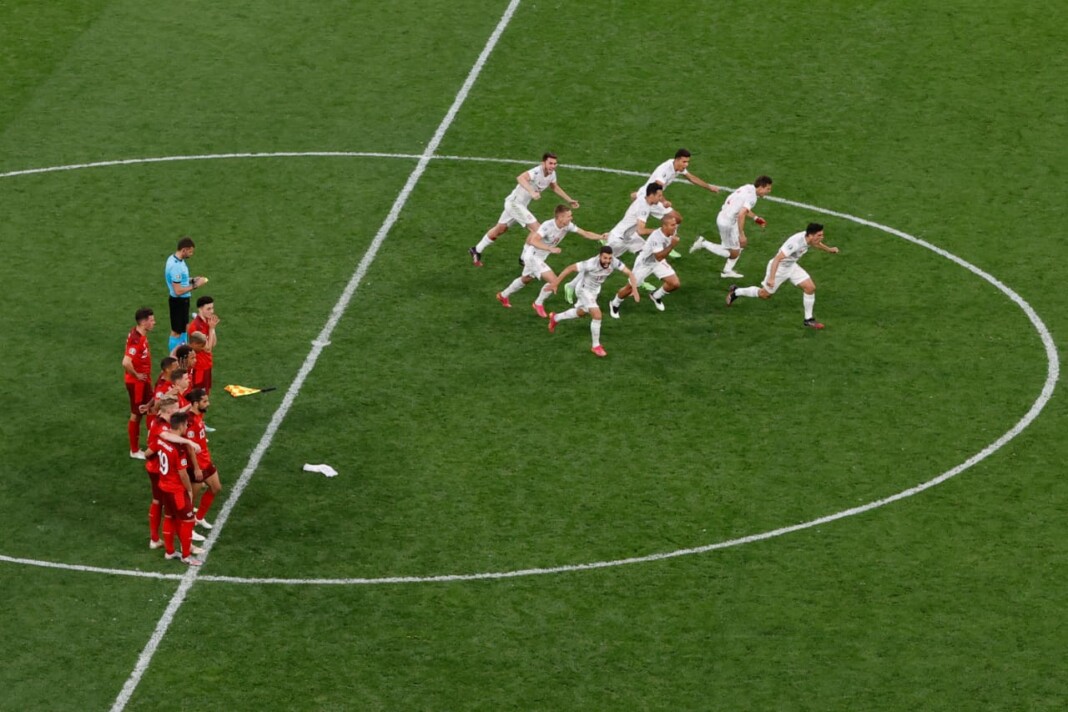 Yann Sommer- 8.5/10 – A wall in goal for the Swiss team and solely kept his side in the game making save after save, especially after they went doen to 10 men.

Manuel Akanji- 6.5/10 Played a very good role in the defense, fought till the end, but missed the penalty after Sommer had saved Rodri’s penalty.

Ricardo Rodriguez -7.5/10, Average performance, was more involved defensively but went forward on set piece occasions to make an impact on the game.

Steven Zuber- 6.5/10– Played out a decent game in midfield looking to hold onto the ball when ever they invited a bit more pressure from their opponents.

Denis Zakaria –6/10 Cane in for the Swiss captain and was rather unfortunate to have been given the credit of Spain’s first goal which went in after a deflection.

Remo Freuler- 6/10 A mixed EURO 2020 match for the midfielder, after assisting Xherdan Shaqiri’s goal in the second half got himself sent off rather unluckily for a challenge on Moreno.

Silvan Widmer- 6.5/10 , Got himself booked in the second half of the match after a challenge on Busquets.

Xherdan Shaqiri- 8/10 – Turned saviour for his side scoring the equalizer and put in a real captains performance for the Swiss. Scored his third goal of EURO 2020 and took his tally to 8 goals in major tournaments.

Breel Embolo- 5.5/10, An unlucky match for the exciting forward who had to be subbed off inside the first half due to an impact injury.

Haris Seferovic – 6/10 Did not have a good match, and lacked service played into him. Was out muscles by the likes of Laporta and Pau Torres.

Simón – 6.5/10– Was excellent when called upon and made his presence felt in the penalty shootout keeping out two strikes from the Swiss.

Azpilicueta- 7/10– Once again a shift at the back and was good in attack linking with Ferran Torres to mastermind most of Spain’s attacking moves.

Pau Torres – 7/10- His miscommunication with Laporte led to the Swiss equaliser and wasn’t really called upon much throughout the match.

Laporte – 8/10- His mistake in communication led to Shaqiri’s goal and was never really called upon much, as Spain had most of the possession.

Alba- 7.5/10- ‘If you don’t buy the ticket, you never win the lottery’ – His shot from outside the box deflected off Zakaria’s foot and was the only goal for Spain for all their efforts.

Koke – 8/10– Another great display from the Atletico man who drove the Spanish team forward every time they had the ball.

Busquets – 8.5/10- Misses his penalty kick and put Spain under enormous amount of pressure. Across the 120 minutes played a decent match overall.

Pedri – 7.5/10- The diminutive midfielder had an excellent game and was arguably Spain’s best player on the pitch and the best player of EURO 2020 so far for Spain.

Sarabia – 8.5/10- An uninspiring perfomance from the winger and was subbed off by Enrique at the half time break.

Morata – 7/10- The striker linked up well with his attacking players but in a rather interesting move Enrique decided to take him off early into the second half.

Torres – 8/10– A constant threat in attack for the Spanish side he was one of the most lively players on the pitch.