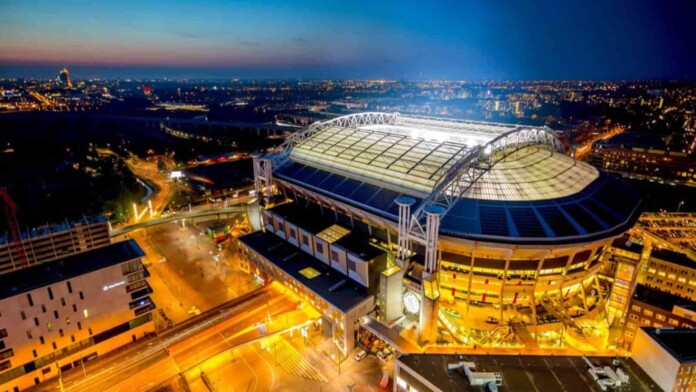 The European Championships are all set to commence on the 11th of June and will feature 24 teams who will battle it out for a month to earn European supremacy on 11th July. The 16th edition of the quadrennial tournament will however, not be like any other year as UEFA have not named a host nation for the entire tournament.

The EURO 2020 will be played across Europe in 11 countries, wherein 11 venues will be hosting the games of the competition this year. Although initially, 13 venues were named 2 had to be chalked off as Dublin and Bilbao failed to assure UEFA that crowds would be allowed into the games. We take a look at one of the 11 venues – The Johan Cryuff Arena in Netherlands.

Initially known as the Amsterdam Arena, the stadium was renamed to the Johan Cruyff Arena after the Dutch legend Johan Cryuff who died in 2016. The name was changed in 2018 and has been since known by its new name. The stadium serves as the home to AFC Ajax and is the largest stadium in the country.

The Johan Cruyff ArenA hosted the 1998 Champions League final between Real Madrid and Juventus and the 2013 Europa League final between Chelsea and Benfica, several group and knockout matches at Euro 2000. The Johan Cryuff arena will host all of its home team- Netherlands’ group matches against Ukraine, Austria and North Macedonia. It will also host a Round of 16 match. Expect plenty of support for the Dutch in their home games as 17,000 fans have been allowed to enter the stadiums during the Euros.

Matches Slated to be hosted at Johan Cruyff Arena, Netherlands

Also Read: EURO 2020 Venues- All you need to know about Puskas Arena, Budapest