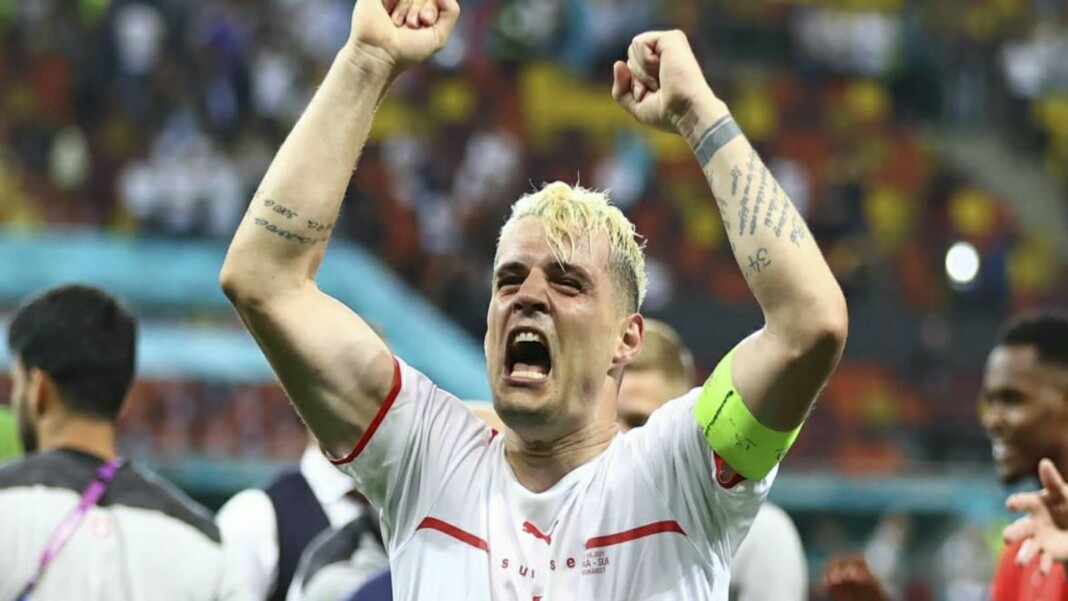 Switzerland have pulled off one of the greatest results in their history, defeating France in penalties in the Round of 16 of EURO 2020 to book a place in the quarter finals themselves. The match which ended 3-3 after a dramatic comeback from the Swiss was won courtesy of Kylian Mbappe’s missed penalty in the penalty shootouts.

They are now scheduled to play Spain in the quarter finals of EURO 2020, but will miss their captain, Granit Xhaka who is suspended for the clash. The Swiss midfielder has picked up a suspension after an accumulation of two yellow cards in the competition so far.

According to UEFA’s Article 52, a player is suspended for the next match after picking up two yellow cards in two different matches. The rule remains for all knockout matches with the only exception taken in the finals of the tournament.

Granit Xhaka picked up his first yellow card against Turkey, which his side ultimately won 3-1- for protesting the referee’s decision of not awarding a penalty. He picked up his second booking against France for a meaningless challenge on Kingsley Coman in the second half of the match.

The midfielder took to his Facebook account and wrote how gutted he is at missing the opportunity but says he has full belief in his team’s ability to win the match. “It breaks my heart not to play tomorrow – but I have FULL BELIEF in us to get the job done. What this squad have is special and we’re going to give our absolute everything to keep making history.”

Players one booking away from missing the semi-finals

The following players are in risk of missing the semi-finals of EURO 2020, if they pick up a yellow card in their quarter final match and provided their team does go on to win the match. Switzerland can miss upto 7 players if the mentioned players get themselves booked and they manage to hold onto Spain in the quarter-finals. Even 4 England players need to be careful of their discipline in their match against Ukraine to make sure of their place in the semi-finals.

Also Read: Euro 2020 Belgium Vs Italy Live Stream: When Where and How to Watch