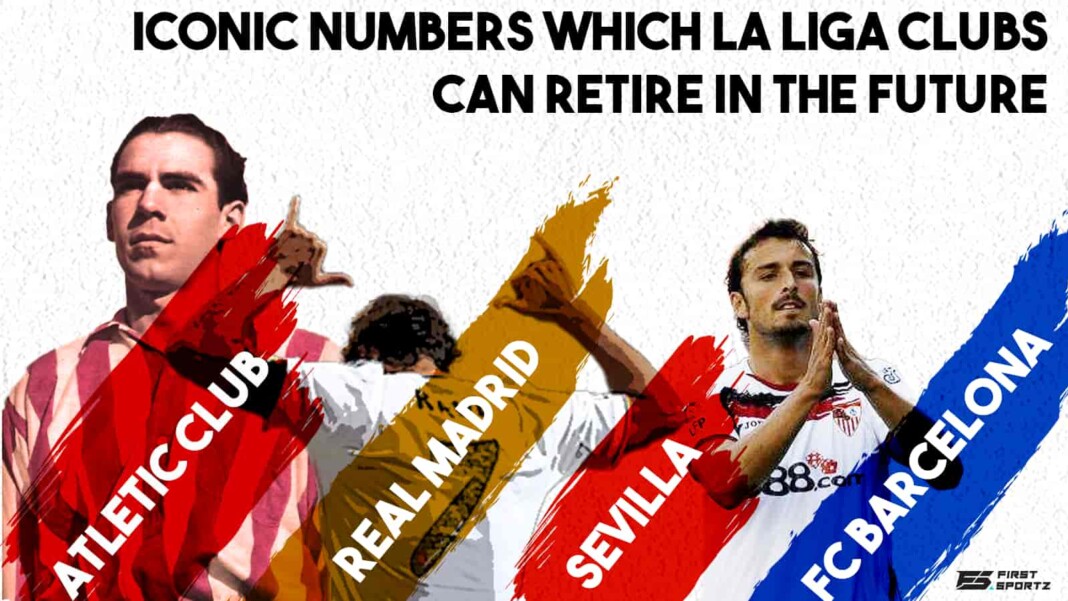 La Liga clubs have witnessed some legendary players as the league has progressed over the years, but there are certain players who have caught the eye of the footballing world. We will be checking out the iconic jersey numbers which the La Liga teams could retire as a sign of respect for the players who has dedicated their majority of their lifetime in the respective Spanish clubs.

The Spanish footballer was a free kick specialist and has scored 123 goals in 265 appearnaces for Athletico Madrid. But his footballing career did not only end as a player as he also went on to create history by guiding Athletico Madrid for the 1976/77 title as a manager and also won the Don Balón Award for the Best coach that season. He used to wear the number 8 Jersey in Athletico Madrid, proving himself to be one of the greatest players and coach in the Club’s history. Currently Antoine Griezmann carries the sole duties of the number 8 and the fans have a high expectations from the Frenchmen as he has always been there for the team in their dire states.

Lionel Messi has devoted his entire footballing career to FC Barcelona as the Argentinian was always there leading the team from the front to it’s glory. He is the leading scorer of the club with 672 goals in 778 caps. The six times Ballon D’or winner donned the Number 10 Jersey in FC Barcelona for 13 years until his departure in summer 2021. There were rumours about Barcelona retiring the number 10 but it was then given to the young Spanish winger Ansu Fati who currently carries a lot of responsibility and expectations from the fans.

Joaquín, the Spanish winger has been the academy graduate of Real Betis and since the very beginning has been involved with the Spanish club in it’s own ups and downs. He has dedicated majority of his career to Real Betis and has 65 goals in 466 appearances. The number 17 jersey donned by Joaquín has marked a different place in the club’s history. The 40 years old winger is still continuing to prove himself in Real Betis as the 2021/22 season is in progress. Real Betis out of respect to Joaquín should retire the Jersey number 17 after the Spaniard decides to hang his boots.

Iago Aspas, the Spanish striker has been playing for Celta Vigo since the very beginning of his career emerging from the youth ranks to become one of the best players in the Club’s history. He is the leading goalscorer for Celta and has 168 goals in 388 appearances for the club and is still adding to the tally even at the age of 34 years. He has wore the number 10 Jersey for 8 years in the club and looks likely to be playing for a couple of years maybe even more before he decides to hang his boots. The Jersey that Celta should retire in future out of respect for the player is Iago Aspas’s number 10.

Daniel Jarque the Spanish centre back was an absolute beast player who used to play for RCD Espanyol from the very beginning, rising up through the ranks from the youth team. The defender passed away at a young age of 26 years due to a heart attack in 2009 leaving the entire footballing world in shock as he had the talent to achieve heights and be among the best. The number 21 jersey donned by Jarque was retired out of respect by Espanyol until 2016 when they decided to bring the Number back in by giving it to one of the youth graduates of Espanyol, Nico Melamed as they thought it was the best way to pay tribute to the legend.

Samuel Eto’o has spent majority of his career playing in the Spanish league and has shown his class performance over the years. While in Mallorca from 2000-2004, Eto’o received a lot of love and respect from the fans due to his humble nature and for what he kept on giving the club. In 2002/03 Copa Del Rey win, Eto’o paid for the food for all the supporters who came to watch the match of Mallorca in the finals which they went on to win 3-0. He had 70 goals in 165 appearances for Mallorca as he wore the number 9 jersey throughout the 4 seasons in the club. Currently the number is worn by the Spaniard, Abdón Prats who plays as a forward for Mallorca.

Raúl González Blanco one of the greatest players ever to have graced the football pitch in the modern era. The Spaniard striker emerged through the ranks of the Los Blancos as he dedicated his entire career bringing glory to Real Madrid. He has scored 323 goals in 741 appearances for Real Madrid and is the second highest goalscorer in the Club’s history. He wore the number 7 Jersey during his time in Real Madrid which was given to Cristiano Ronaldo later on after his departure. Currently Eden Hazard has been wearing the number 7 of Real Madrid as he struggles to provide an impact in the Spanish club butthe Belgian winger has promised this season that he will proving his worth and will become a true Los Blancos over the years.

Antonio Puerta has played for the Sevilla team from the very beginning until the day he passed away at the age of 22 after he suffered a series of cardiac arrest in the match against Getafe in La Liga in 2007. Sevilla were not able to retire the Number 16 Jersey due to some La Liga rules so as a tribute to the Late Antonio Puerta, the number 16 Jersey were only given to the academy graduates of Sevilla as it is currently worn by Jesús Navas. Puerta had 8 goals in 88 appearances for the club and had the potential to rise through the ranks to reach the top.

Mario Kempes is known as one of best at striking the balls and is known to wonder with his powerful shots from outside the box. He has played for Spanish Club Valencia for about 9 years and scored 149 goals in 246 appearances. The number 10 Jersey donned by the Argentinian is known to be one of the greatest due to the skillset which Kempes brought with him in Valencia. Currently the number 10 is worn by Carlos Soler as he continues to guide Valencia in the midfield.

Santiago Cazorla has been one of the greatest players to have played in Villareal as he was the highest goalscorer as a midfielder in the club’s history. He wore the number 8 Jersey during his time in Villareal as he went on to score 57 goals in 334 appearances for the Spanish side. Currently the Number 8 Jersey is donned by the Argentinian centre back Juan Foyth who was recently signed from Tottenham on a permanent deal.