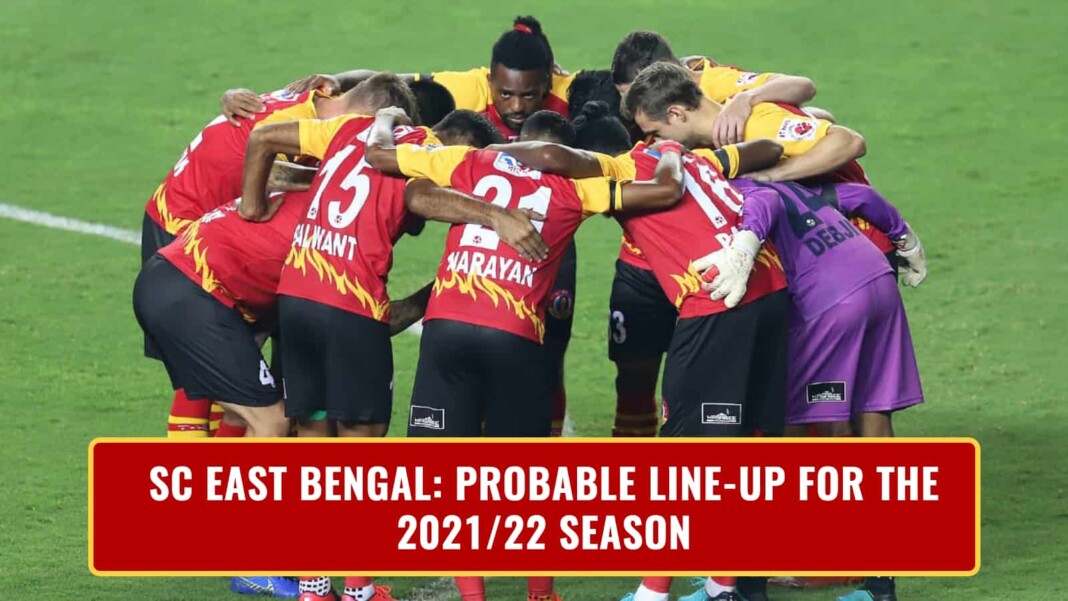 After a disappointing 2020-21 campaign where they finished ninth in the standings, narrowly ahead of Kerala Blasters FC and Odisha FC, with only 17 points, SC East Bengal would go all guns blazing to reclaim their status of a top club in the new season. With new players and more importantly a new coach, SC East Bengal would be a tough nut to crack this season.

They appointed Manuel Diaz to replace Robbie Fowler with the new coach having a lot of experience with Real Madrid Castilla and Hercules in Spain. However, for the first time in his career, the 53-year-old Spanish coach will be based in India. East Bengal look rejuvenated as they have shuffled the squad a lot by bringing in a significant number of Indians ahead of the Indian Super League.

Manuel Diaz would tweak the team according to characteristics of the players, and from what looks likely, the Red and Golds could go ahead with a 4-4-2 formation, which has been often favored by the new manager previously. However, he can only use 4 foreigners during the game and rest have to be Indians. Therefore, let us look at the probable line-up when they face Jamshedpur in their first match on 21st November.

Arindam Bhattacharya is anticipated to repeat or improve on his performance at ATK Mohun Bagan previous season, when he grabbed the golden glove. Under the sticks, the 32-year-old is a commanding presence who will aid in maintaining the defensive structure.

The 25-year-old full back graduated from the East Bengal youth academy and began his career in Aryan FC of the Calcutta Premier League before joining Mohammedan. Mukherjee also played for ATK nine times and has a goal to his name.

Adil, 33, joined FC Goa on loan during the January window after serving a season and a half at Hyderabad FC. Last season, the national team centre-back played with FC Goa in the AFC Champions League, making five appearances for the Gaurs. He is a rock-solid defender who is very reliable o lead the line.

The 30-year-old centre back from Australia previously played in the A-League for Perth Glory in Australia, where he also won the title. The management brought in the 6’3″ defender to bolster their defence which allowed 33 goals in the last season of the Hero ISL.

Bikash Jairu, although not a household name, would prove to be a key player in the defense because of his experience in Indian football. He is expected to take the LB spot as his attacking abilities coupled with determined defending make him a solid player to bank on.

Jackichand Singh returned to his previous club this summer transfer window of the 2021-22 season, where he played in the early months of the 2017 calendar year, making 7 appearances. The Indian Super League’s eighth season will be crucial for Jackichand Singh, who will have a lot to prove.

SC East Bengal’s first foreign signing this season was the 29-year-old centre midfielder, who has made six appearances for Slovenia. He used to be a part of the Slovenian club NK Maribor. The Slovenian will be key for SC East Bengal since he is expected to be the forwards’ major supplier.

Amarjit Singh Kiyam and Sourav Das would compete for a spot in the double pivot but the former might make the edge. He previously led the India U-17 team in the 2017 FIFA U-17 World Cup and played for FC Goa in the AFC Champions League, where he was a standout performer.

Romeo Fernandes is back in Indian football’s top flight, this time with SC East Bengal. The former FC Goa winger, who created waves during the first three editions of the ISL, went on to become the first Indian player to play professionally in Brazil before going missing. Romeo was on loan from FC Goa when he joined East Bengal in 2016-17.

The Nigerian centre striker has agreed to a season-long contract with SC East Bengal. He was a goalkeeper for Molde FK, a club led by Ole Gunnar Solskjaer and included Erling Haaland on the bench. In terms of his style of play, he is a prolific poacher up front who will take advantage of even 2 inches of space in the 18-yard area added with a exceptional heading ability.

The 29-year-old Croatian is a natural centre forward with the attributes of a winger/wing-forward who would significantly help SC East Bengal in this season of the Hero ISL. He’s played for clubs like Puskas Akademia and Ujpest FC in Croatia’s top division, and he’s also made two appearances for the national team.