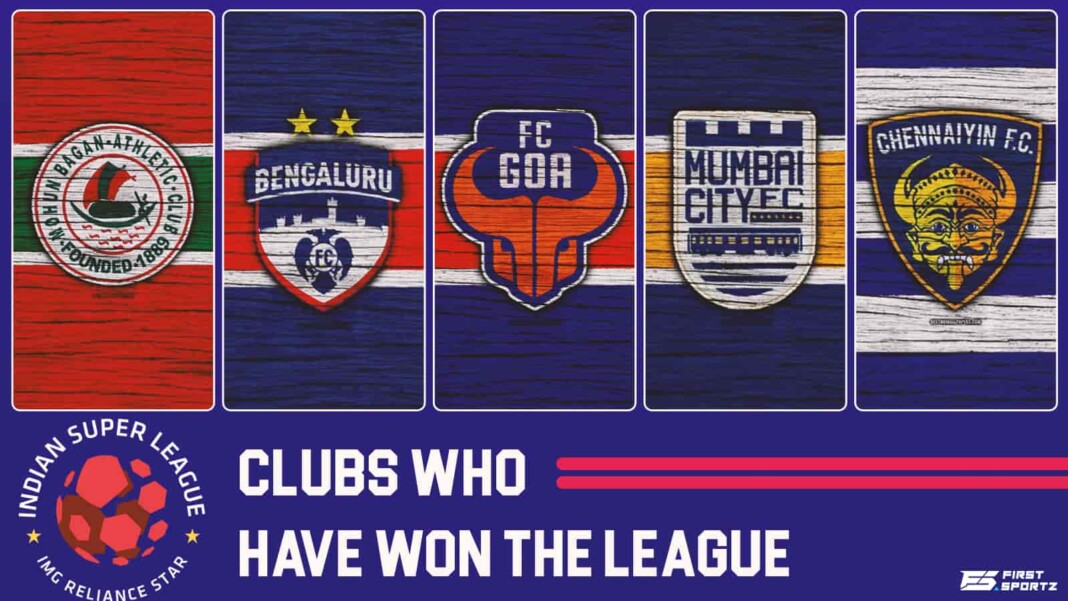 Indian football has undergone dramatic changes over the past decade, and if a turning point is to be picked out it has to be the start of the Indian Super League, which happened in 2014. The newly launched league soon grabbed major viewership and raised the standards of Indian football, also bringing it to the global stage, which the I-league had failed to do previously.

Since its inception, the ISL has attracted some of the best players from all across the world, which has helped increase the brand value of the league by leaps and bounds in these past 7 editions. The Indian Super League currently exists as the highest level of football in the country and is all set to start for its 8th edition on the 19th of November this year.

With that in mind, we take a look into the ISL winners list over the past 7 years.

Atletico De Kolkata won the inaugural season of the ISL, after having an excellent campaign in the league stages. With Luis Garcia as their marquee player and Antonio Lopez Habas as their manager, the side from Kolkata showed the amount of depth and talent the maidans from Kolkata produce every year.

In the final of the first season, they faced Kerala Blasters at the DY Patil stadium, in what turned out to be a thrilling end to a new era in Indian football. Atletico De Kolkata’s Mohammad Rafique scored a 92nd-minute winner from a corner to etch his and his club’s name in history forever.

Chennaiyin FC won the trophy in the second season, making a comeback for the ages under Italian legend Marco Materazzi’s tutelage. The South Indian side, finished third in the group stages winning their last four league matches and earning themselves a place in the play-offs.

Atletico De Kolkata continued their dominance in the Indian Super League and won their second title this time under new manager Jose Francisco Molina. With a largely remodelled side, which involved foreign players like Portuguese striker Helder Postiga, Canadian striker Ian Hume and South African winger Sameehg Doutie, they managed to finish fourth in the league table, to creep into the play-off spots.

They came up against league leaders Mumbai City FC in the semi-finals and Molina’s side won the two-legged contest by a margin of 3-2. In the finals, they faced familiar foes, Kerala Blasters whom they had played in 2014, and managed to do the double over them winning the match 4-3 on penalties after the match ended 1-1 in regulation time.

What Atletico De Kolkata can do, it seemed Chennaiyin FC could do as well, as they became the second club to win the title two times in 2017. The Indian Super League had an expansion that year, with two new sides joining the league making it a 10-team affair and Chennai came up trumps to double their tally.

Chennaiyin FC finished second in the league table and went on to face third-placed FC Goa in the semi-finals. With John Gregory as their manager, they managed to win the semi-finals comprehensively and faced new entrants Bengaluru FC in the finals. Chennaiyin won the finals, played at the Kanteerava stadium with goals from Brazilian duo- Mailson Alves and Raphael Augusto by a margin of 3-2.

I-League’s big boys, Bengaluru FC did not need much time to stamp their authority on the Indian Super League as well, making amends for the loss in the finals of the 2017 edition. The Blues continued their hot streak from 2017-18 and finished the league stages on top for the second time running. Carles Cuadrat’s side had veteran Indian players in the form of Sunil Chhetri, Gurpreet Singh Sandhu and Rahul Bheke, all of whom helped them come out on top in the semi-finals and finals with crucial contributions.

Bengaluru FC defeated NorthEast United in the semi-finals by 4 goals to 2 in the two-legged tie and defeated FC Goa by the smallest possible margin courtesy of a 117th-minute headed winner from Rahul Bheke.

Atletico De Kolkata, playing under the new name ATK since 2017-18, became the first club to win the Indian Super League title three times when they won it in 2019-20. They brought back their old title-winning coach from the inaugural season, Antonio Lopez Habas and the Spaniard delivered immediate success leading his side to the title.

ATK finished second among the 10 clubs after the end of the group stage phases and made their way into the final stages of the season. The Kolkata based side were pitted against Bengaluru FC and needed a comeback victory in the second leg of the semi-finals to book their place in the finals for the third time. They won the second leg 3-1 after losing the first match 1-0 away.

However, in the finals, they did not need to produce anything of that sort and comfortably won 3-1 against Chennaiyin FC to lift the coveted ISL title for the record-breaking third time.

After years of underwhelming results, Mumbai City finally won their first Indian Super League title under coach Sergio Lobera. They are the defending champions and had an excellent run in 2020/21 where they finished top of the league stages courtesy of their better goal difference than ATK Mohun Bagan.

Mumbai had to face fourth-placed FC Goa in the semi-finals, and it turned out to be a thrilling encounter between the two neighbouring sides from the South which eventually was clinched by Mumbai. After the match ended at 2-2 over both legs, a rigorous penalty shootout was needed to separate the two sides. After 9 kicks, Mumbai City won the tie 6-5 to make their entry into their maiden ISL final.

They won the thrilling final against ATK Mohun Bagan through a 90th-minute winner from Bipin Singh after equalizing from Tiri’s own goal in the 29th minute. They will start the new season as the defending champions.