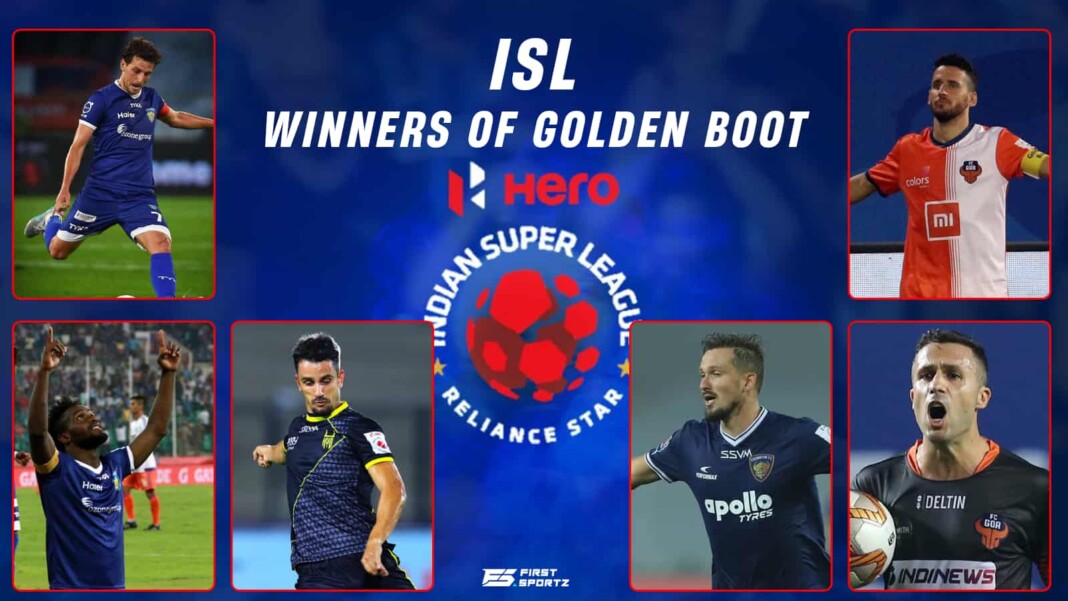 The Indian Super League (ISL) has come into the folds since the year 2014 and has made a name for itself beside I-League in the Indian league football format.

Let’s take a look at the winners of the Golden boot since the first season of the Indian Super League (ISL), in 2014.

The Brazilian forward has represented many big European clubs throughout his career which include the likes of Manchester City, Galatasaray, Shakhtar Donetsk and many more.

Elano Blumer was one of the marquee signings in the opening season of the ISL who played for Chennaiyin FC and he definitely did not fail to leave a mark as he became the leading goalscorer of the tournament with 8 goals in 11 matches winning the first golden boot of the season.

The Colombian forward came in as a loan player from Corinthians in 2015 and proved his worth as one of the best with the Chennaiyin FC.

Stiven Mendoza scored two hat-tricks in his very first season and started to make and break records in the second season of the ISL. He scored 13 goals in 16 appearances to win the Golden Boot Award of ISL 2015 and also became the key player in Chennaiyin FC’s first ISL trophy.

The Brazillian forward was signed by Delhi Dynamos in 2016 when they needed someone experienced in the front to lead the frontline. Marcelinho delivered from the very first game and maintained his consistency throughout the tournament.

He scored 10 goals in just 15 games in the third season of the ISL as he was the deserving winner of the Golden Boot Award in 2016. Although he scored in the semi finals, Delhi succumbed to a 2-1 loss against Kerala Blasters getting themselves knocked out from the tournament.

The Spanish forward Coro began his early football career in the youth academy of Espanyol from he started rising through the ranks. He joined FC Goa in 2017 and became the winner of the Golden Boot Award at the end of the season with 18 goals in 20 caps.

FC Goa renewed contract with Coro after the Spaniard proved his worth to the club. He helped the club to reach the finals of 2018/19 season of ISL but was unfortunate enough to lose 1-0 to Bengaluru FC. Coro again became the Golden boot winnner for the second consecutive time, scoring 16 goals in 20 appearances.

Nerijus Valskis is an experienced Lithuanian forward who began his journey in ISL with Chennaiyin FC in 2019 where he left his imprint on the walls of the competition in his debut ISL season.

Nerijus scored 15 goals in 20 appearances in the 6th season of ISL and won the Golden Boot Award. He played a major role in taking Chennaiyin FC to the finals of the competition for the third time in the history. Even though Nerijus scored a goal, Chennaiyin was not able to defend against ATK losing 3-1 in the finals.

Angulo, the Spanish striker joined FC Goa in 2020 and was the most experienced player on the field. He had an exceptional eye to score goals and it was definitely visible in his stint with Goa in 2020/21 campaign.

Igor Angulo scored 14 goals in 21 appearances as he helped FC Goa reach till the semis where they fell down to Mumbai City, the would be champions, getting knocked out in the penalties. Angulo became the winner of the Golden boot in 2020/21 season and has recently signed with Mumbai City for the recent campaign.

Also Read: “He’s one of the best players that’s ever walked on this planet,” Ole Gunner Solskjaer’s interview before the Manchester Derby