Lionel Messi is widely regarded as the best player ever to play football. That makes sense as he has won numerous titles, scored more than 600 career goals, provided several assists and won more than 100 Man of the Match Awards.

Even when the Argentinian doesn’t score, he usually plays an instrumental role for his team by linking up play and with his world-class dribbling. At the age of 34, he does not seem to be at the end of his career and still performs at the top stage in football week in-week out.

The Argentinian has inspired millions of people including young football players. His dribbling and goal-scoring ability is called “Messi Magic” by many fans and commentators.

Lionel Messi won a record 7th Ballon D’or earlier this week in France and was hailed as the best player in 2021 once again by many journalists, fans and players across the world. The Argentinian star became the most trending topic on Twitter and Instagram too.

Lionel Messi carried FC Barcelona last season by scoring 30 goals and providing 11 assists in 35 La Liga appearances. The 34-year-old also scored 5 goals and provided 2 assists in the UEFA Champions League. He was the best player in the Spanish League.

Messi also won his first international trophy with Argentina by winning the Copa America in the summer. He was the team’s top scorer and top performer as he played an instrumental role throughout the tournament. The 34 year old left FC Barcelona to join Paris Saint-Germain in the summer of 2021.

Resurfacing of the viral video where Lionel Messi is seen drunk:

As soon as Lionel Messi won his 7th Ballon D’or, an old video of his resurfaced on social media where the Argentinian was allegedly drunk while celebrating with his FC Barcelona teammates as they won the 2009 UEFA Champions League.

FC Barcelona were the best team in the world in 2009 as they had won the famous treble that season. The great team had world-class players in every position but the one that stood out the most in that team was a young Lionel Messi. While he displayed his superhuman skills on the field during the match against Manchester United in the final, he was definitely human while celebrating with the team after the win.

The viral video shows Lionel Messi stumbling and tripping around on the top deck of an open bus while celebrating the win with his teammates and the fans during the victory parade. Trying to reach to the other end of the bus, Messi stumbles across his teammates who notice he is in a drunk state.

The video then shows that all his teammates laugh and joke with him after seeing the Argentinian drunk. Messi then proceeds to go on the stage and takes the microphone and speaks to the fans.

Check out the video:

While speaking to the Barca fans, Messi said,” You wanted a treble! Well here’s a treble! Next year, we will continue and we will win everything! We will celebrate again! Thank you very much for everything. Long Live Barca! Long Live Catalunya!”

This short speech excited the fans and they cheered and sang the Argentinian’s name while he stumbled down the stage and celebrated with his teammates.

This version of Lionel Messi is very rare to see as he is regarded as a person who does not party a lot and likes to live a simple life. It was clear to see that Messi certainly enjoyed on the pitch destroying teams, as well as, off the pitch by celebrating with his teammates and fans.

Also Read: Top 5 Goalscorers in the history of Football 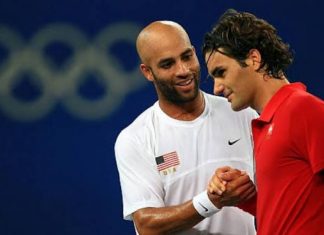 Drishti Geete - January 17, 2022
James Blake is an American former professional tennis player. His highest ranking in singles according to the Association of Tennis Professionals is World No.4...