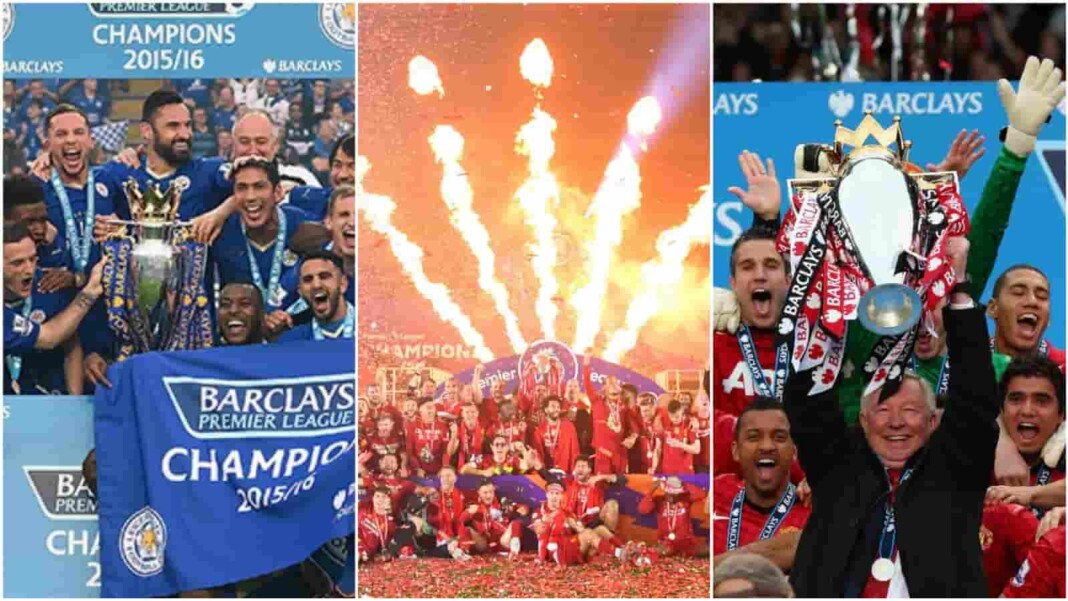 The Premier League or the English Premier League came into existence in the year 1992 and took over as the top level of the English football league system. It was founded on 20th February, 1992 following the English clubs’ decision to breakaway from the initial Football League which used to serve as the first division of England from 1888-1992.

The Premier League is the most popular League in Europe and has extensive coverage all of the world and it boasts of having the best players, managers in the world involved in it. It is the most-watched sports league in the world, broadcasted in 212 territories to 643 million homes and has a potential TV audience of 4.7 billion people.

In this article, we take a look at the Premier League winners of the different editions from 1992 up until the recently concluded 2020-21 season.

Manchester United are the Most Successful Club with 13 trophies

Manchester United have won the Premier League a record 13 times in the new era, which started in the first season of the inception of the league in1992. The Manchester based club have then gone on to win the Premier League on 12 more occasions, which also included two hat-trick of titles in the years  1998-99 to 2000-01 and also in the latter stages of the decade from 2006-07 to 2008-09. Their most recent title came in 2012-13 and the club have since undergone a transformation of sorts which has not enabled them to win a title in the recent years.

Manchester City are the current Premier League Champions having won it for the 5th time in the 2020-21 season under the leadership of Pep Guardiola. The club hailing from the other part of Manchester won their first ever Premier League title under Roberto Mancini in 2011-12 in dramatic fashion, with a Sergio Aguero goal in the final minute of the final match of the season. They have won the title in the years- 2013-14, 2017-18, 2018-19 and 2020-21 with the last three coming under the reign of current coach Pep Guardiola.

Chelsea also have 5 titles to their name in the recent era, with the first of them coming in the season of 2004-05 under Portuguese manager Jose Mourinho. He also led the Blues to the title next year in 2005-06 and once again in his return spell in 2014-15. Their most recent success in the top flight of English football came in 2016-17 under Antonio Conte.

The other clubs who have won the Premier League title in the modern era after 1992 are Arsenal who have 3 titles to their name, including the Invincible title in 2003-04 under Arsene Wenger where they created a record of not having lost a single match throughout the season, a record which is still yet to be emulated by another football club in England. They also won in 1997-98 and 2001-02.

Blackburn Rovers, Leicester City and Liverpool won the title once each

Blackburn Rovers, Leicester City and Liverpool have won the Premier League title only once in their history. Blackburn Rovers won it in the season of 1994-95 under Kenny Dalglish.

Liverpool earned their piece of silverware for the first time after enduring a drought of 30 years where they had failed to win the domestic title by winning it in the 2019-20 season. Jurgen Klopp led the Merseyside club to their first ever Premier League title following a Champions League glory in the previous season.

Also Read: Manchester United, Liverpool or Chelsea: Which is the most popular club in Premier League?