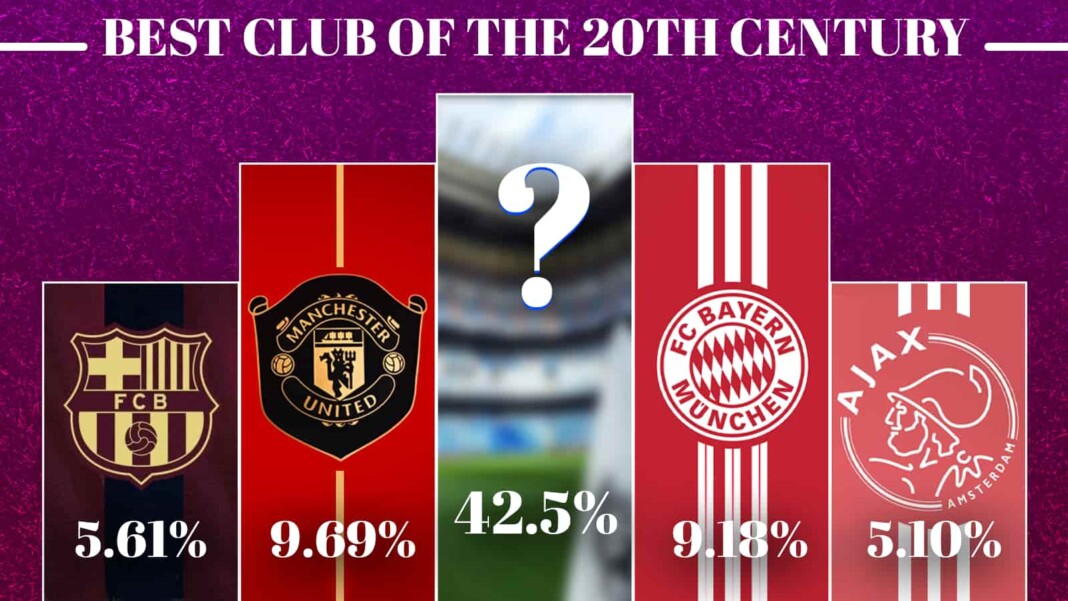 On 11th December 2000, Real Madrid was honored with one of the best awards that any club can get. Any guesses? Los Blancos was awarded with “FIFA Club of the Century” in a presentation ceremony held in Rome. The fans were asked to vote for the best club of the 20th century and Real Madrid pipped all the other clubs like Manchester United, Bayern Munich, Barcelona and Ajax.

Here is a sneak at how the clubs fared in the voting:

Real Madrid was founded in 1902 and the team consisted of the graduates from the Ivy League Universities, Stanford and Harvard. Within three years of its inception, the team was able to win their first ever trophy in the form of Super Cup or Copa del Rey. The club won their first ever Copa del Rey in 1905 after they went past Athletic Bilbao in the finals.

Their first win boosted the team’s confidence for the next season. The Los Blancos registered three back to back Copa del Rey trophies. The team became the part of the foundation team that laid the tracks for the Spanish La Liga. The brainchild became a reality in 1929. In the first ever season, Real Madrid could not win it. But the team was able to win it in the 1931/32 season and retained it for the next season as well.

The best club of the 20th Century: The Period of Dominance

The period of 1950-1960 was an absolute dominance of Los Blancos. Real Madrid won four consecutive La Liga titles along with five European titles out of the eight European titles that they won in the entire century. They also capped off the decade by winning the Inter-continental cup in 1960.

The 1960-1970 is known for Real Madrid’s domestic dominance in Spain. The team did not leave anything for the opposition to win in those years. Out of ten La Liga titles, the Spanish outfit took home seven titles. Along with that, they won two Copa del Rey titles. Their dominance started to fade in the 1970s but were able to win La Liga consistently.

The best club of the 20th Century: The competition and failures of Real Madrid

In the 1980s, the emergence of other teams started to affect Real Madrid’s stature. The Los Blancos failed to win any La Liga titles for five years. It was the start of the competition in the Spanish domestic circuit. The Copa del Rey and European titles were also dried up. During the 1980-1990 decade, Real Madrid returned with five La Liga titles and two Copa del Rey trophies.

At the present, there is a lot of competition in the Spanish football circuit. The rise of teams like Atletico Madrid and Sevilla has affected the team’s free-flowing title chase. Nevertheless, Real Madrid are the best in the business. In the 20th century, they won 63 titles.

Why is Real Madrid the best club of the 20th century? A glimpse: