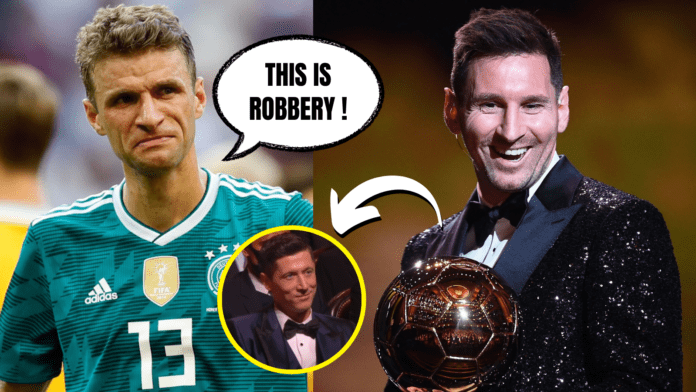 Last night France Football awarded Lionel Messi his 7th Ballon d’Or trophy, naming him the best football player of the 2020-21 season. It was a moment of celebration for Messi fans all over the world as it somewhat ended the GOAT debate. However, it was not void of controversies as a huge part of the football world thought that Bayern’s Robert Lewandowski deserved the award more due to his prolific goal scoring records last season. The Polish striker’s teammate at Bayern Munich, Thomas Muller, has now shared his thoughts on the issue through his LinkedIn account.

German attacking midfielder Thomas Muller has been pretty open hearted and straightforward since Day 1 of his career – a trait that is not much liked by many. His savage takes on football and trash talks ahead of the matches often gets under the skin of the opposition and thus the German tries to speak as little as possible. But when he does, people listen to him with utmost focus and something similar happened today.

What Thomas Muller has said

Speaking on the issue, Thomas Muller said, “From a Bavarian, Polish and also from a German point of view, the presentation of the Ballon d’Or yesterday evening was definitely a disappointment. For some even a little more. Although I’ve been in the business for a bit longer and was therefore not really surprised at the outcome (it was similar with Franck Ribéry in 2013), the whole thing formed or reinforced a thought in me: We have great players in the Bundesliga and we have to not hide ourselves. However, further international successes are necessary for global recognition.”

“This is also a huge motivation for me to throw everything into the balance in order to bring the Champions League back to Munich and to show the football world what is going on. And above all, what German football has to offer.”

With this, the German midfielder vowed for a tremendous performance against FC Barcelona in their last match of UEFA Champions League’s groups stage. The Blaugrana need a win to confirm their entry into Round-of-16 and Muller thinks that a landslide victory against the Spaniards will be the best ‘revenge’.

“We have the next opportunity to do so next Wednesday in the Champions League game against FC Barcelona. Let’s tackle it!”

He concluded with a footnote that read, “With Lionel Messi, the election was probably the best individualist football has ever produced. So congratulations to Lionel on winning the Ballon d’Or, even if I think that Robert Lewandowski would have deserved it more this time. What do you all mean?”

When France Football announced yesterday that two new awards will be presented in the Gala this year, it was already being speculated that one of the awards would act as a ‘consolation prize’ for the Polish. It turned out to be true. Robert Lewandowski won the Striker of the Year trophy while Lionel Messi picked up the Ballon d’Or.

FC Bayern Munich and most of their players, including Thomas Muller, had been rooting for Lewandowski to win the Ballon d’Or on social media for over a month now. They are thus imminently heartbroken after the snub.

Also Read:- Who is Ray Kennedy? Know everything about Liverpool Legend – Net Worth, Family, Wife and Career?