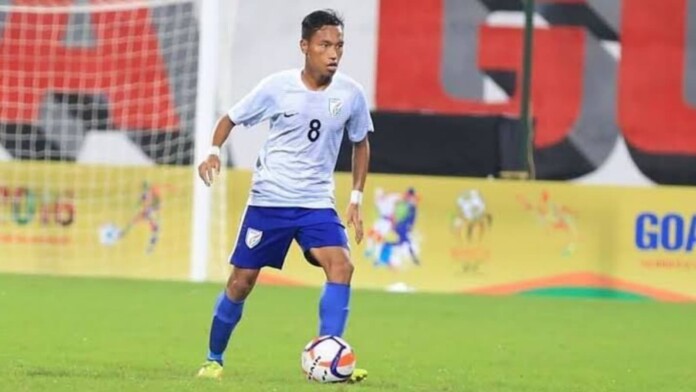 East Bengal have finally confirmed their first transfer signing of the season, after West Bengal chief minister confirmed the club’s participation in this year’s Hero Indian Super League edition. The club confirmed the singing of 20-year old Amarjit Singh from FC Goa on loan for the next season.

The midfielder led the Indian U-17 side in the World Cup in 2017. Singh had recently shifted clubs from Jamshedpur FC to FC Goa in 2021, but failed to nail down a starting eleven spot for himself.

Amarjit Singh captained India in the U-17 World cup

Singh had registered just 2 appearances after signing for the Gaurs and a move to East Bengal will help him reignite his career at the struggling club.

Despite being just 20 years of age, the Manipuri player has already featured 5 times for the Indian National team under Igor Stimac and is seen as one of the leaders of India’s midfield for the future.

Singh also has plenty of experience of playing in the I-League after he spent two seasons at Indian Arrows in 2017 and 2018.

Now it remains to be seen, what other signings Robbie Fowler, the SCEB coach comes up with in the next month as the club are lagging behind the others in terms of signings at the club.

Lakshya Chopra - May 11, 2022
Canadian tennis star Denis Shapovalov had a little heated moment with the crowd during his first-round match at the Rome Masters. He was playing...