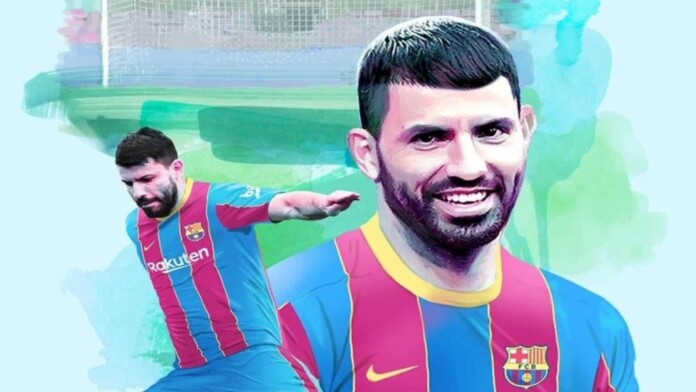 According to the latest reports in the transfer mill, Sergio Aguero has completed his move from Manchester City to Barcelona on a free transfer. The player last featured for Manchester City in the Champions League finals where the Stamford Bridge outfit defeated the reigning Premier League champions 1-0. The famous transfer journalist, Fabrizio Romano tweeted the update regarding Sergio Aguero.

Barcelona also announced the signing of the veteran striker on their club website. They announced:

This will not be the first time that Sergio Aguero will be featuring in the Spanish top-flight. Before joining Manchester City in the summer transfer window of 2011, the player had featured for Atletico Madrid. Aguero joined the English Premier League outfit in a record deal worth €40 million and went on to achieve the club legend status at Manchester City.

Playing for Manchester City for a decade in the English top-flight, Aguero has 184 goals and 49 assists in 275 appearances. Also, before leaving Manchester City, the player won five Premier League titles and one FA Cup to his name.

What Fabrizio Romano has to say about Sergio Aguero and other deals related to Barcelona?

Barcelona find themselves in a deep financial crisis and are looking to restructure their wages. The poor transfer policy is also being looked after by Joan Laporta. The Catalans are interested in acquiring more services from free agents like Eric Garcia, Emerson Royal and Georginio Wijnaldum who are also out of contract on July 1st, 2021.

Also Read: Argentina ruled out as hosts for the Copa America 2021

Varun Aithal - June 13, 2021
In one of the most anticipated clashes of Euro 2020, England locked their horns with Croatia at Wembley Stadium on Sunday. England are considered...