Real Madrid announced last night that they will be parting their ways with their talismanic defender Sergio Ramos. After months of speculations over a new contract, the world cup winner with Spain, multiple UCL winner and Real Madrid club legend has decided to turn down a new contract and leave Real Madrid, a club that he has been associated with since he was 19 years old.

With the 35 year old defender available for free there will be lot of scurrying around for the signature of Sergio Ramos, who despite being injured for quite a bit of time last season is still a brilliant addition to any squad and the veteran player has quite few years of competitive football left in him.

With Ramos demanding around £ 10.2 million a year which is shy of £ 200,000 per week according to AS, the club names thrown into the mix who would be vying for his signature include Manchester United, City and PSG.

Manchester United have been ragged thin in the back last season, and with a lack of a quality suitable defensive partner for Harry Maguire at the club would definitely be looking to sign Sergio Ramos who can complement Harry Maguire’s strengths properly.

Manchester City although have no dearth of quality players in their squad, they do lack an influential leader following the departure of Vincent Kompany. With rumours of Laporte leaving Manchester City due to lack of game time and the departure of Eric Garcia from the club Manchester City are left with John Stones, Ruben Dias and Nathan Ake as the central defenders and they might make a move for the Spanish defender, but whether Pep disrupts his successful league winning partnership of Dias and Stone remains to be seen.

Will the French Giants PSG go for Sergio Ramos?

It is all speculations at this stage but it is going to be a very long summer transfer window and a buys one where these clubs will be scrambling to land the prestigious signature of the defender. 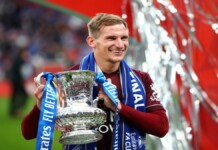