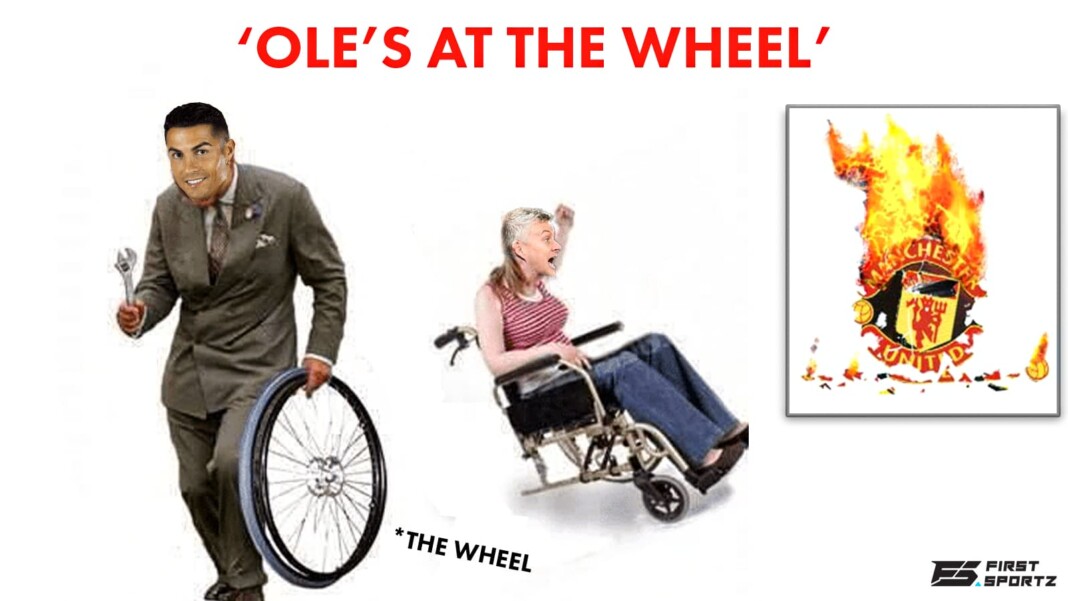 Ole Gunnar Solskjaer has a selection conundrum ahead of the UEFA Champions League games against Atalanta. Manchester United ended up with a horrific defeat to Leicester City at King Power Stadium. Ole’s job is under scrutiny and one of the glaring questions is “Should Ole drop Cristiano Ronaldo”?

The Red Devils host the Italian outfit at Old Trafford with three points from two games. Ole is under serious pressure to win the game. His tactics have come under scrutiny after he played less fit Harry Maguire ahead of Eric Bailly. He has not played Donny van de Beek in a while and the fans are slowly turning against him.

Every player at Manchester United, including performers like Bruno Fernandes, Mason Greenwood, Victor Lindelof and Luke Shaw are being blamed for their lack of productivity but none of them have questioned the Portuguese talisman, Cristiano Ronaldo. No doubt about his caliber but in the last few games, he has failed to live up to his reputation.

The Ronaldo fanboys have direct accusations on Ole Gunnar Solskjaer and his tactics. They have also blamed the lack of service for Ronaldo’s barren run in the Premier League. But is it so?

Should Ole drop Cristiano Ronaldo?: How has CR7 affected the team dynamics?

Ever since the arrival of Cristiano Ronaldo, Manchester United have looked like a different side in the English Premier League. The team is entirely dependent on the talismanic player for the goal. All the passes converge at CR7 after all the creativity from the defense and midfield.

Mason Greenwood does not give the ball to Ronaldo: Is it true?

Against Aston Villa, Manchester United have several chances to put the ball behind the goalie in the first half but they failed to do so as Mason Greenwood denied to string the simple passes. Ever since then, a lot of being told on the player that he has grown selfish. But is it true? Let’s find out.

Ever since the arrival of Ronaldo, Mason’s G/A have dropped severely compared to that of last season. If Shot Creating Actions (SCA) and Goal Creating Actions (GCA) are considered, Mason have averaged big since the Portuguese talisman’s homecoming. With Ronaldo, he accounts for 0.83 GCA along with 3.7 SCA compared to his 0.18 GCA and 1.6 SCA in the 2020/21 season.

Bruno Fernandes: What more should he do?

In the absence of Cristiano Ronaldo’s pressing and carrying abilities from the midfield, Bruno Fernandes has taken the job of carrying the ball along with his ability to create the chances for the forwards. Also, he has accumulated more expected Assists (xA) in the presence of CR7. However, lack of conversion and inability to score the goals of forwards, have let the player down.

It is not that Ronaldo is an issue. But not criticising for his lack of efforts and blaming the manager and other players starts mounting pressure on both manager and players who are giving everything on the pitch to the team.

On the other hand, CR7 is not 30 anymore. He has tiring legs despite having an athletic physique. Edinson Cavani is known for his work rate and trackbacks after losing the possession that Ronaldo has failed to do in the past few games including the game against Young Boys.

CR7 is a luxury that Manchester United bought without assessing the cost of the luxury. The manager requires time to fit in all the stars in a single line-up when a player like CR7 does not offer much on the defensive front. As Manchester United go into the game against Atalanta, who play a highline football, Ole should consider dropping Ronaldo and feature a front three of Rashford, Cavani and Sancho.