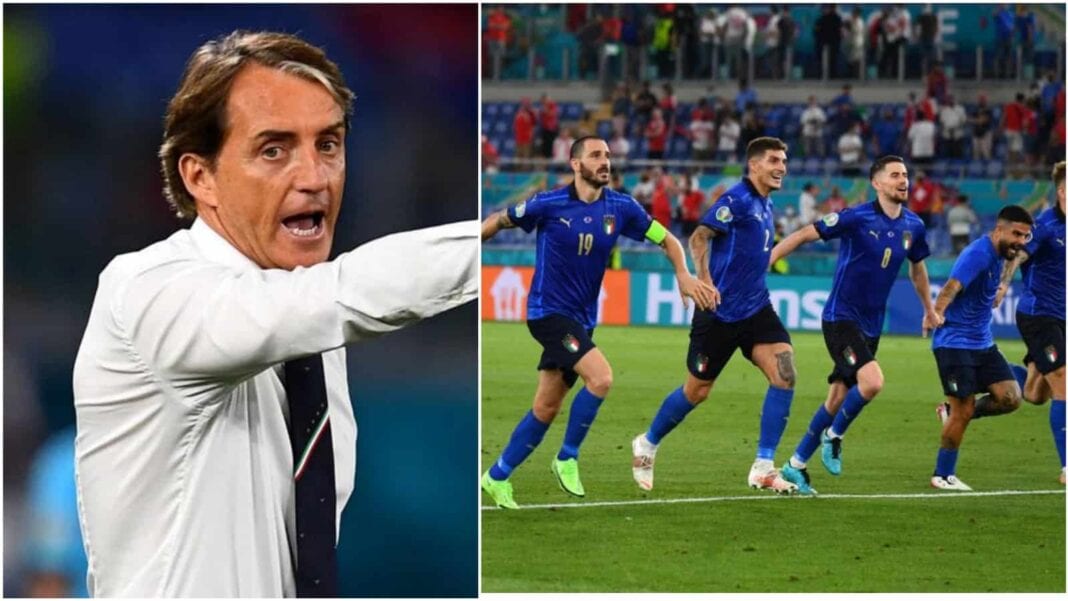 Before Euro 2020 began, few had given Italy a chance to make it to the finals of this prestigious event. The Azzurris didn’t qualify for the 2018 World Cup and looking at their progress before the euros they weren’t expected to come this far. Roberto Mancini was appointed the manager of the national team in 2018 and since then the team has made slow but steady progress.

Big guns like France, Netherlands, Portugal and Germany failed to make it to the semi-finals but Mancini’s Italy has performed brilliantly against all odds. So how did Mancini turned the tide in the Azzurris favour? The 57-year-old manager has a better track record as manager of the national team than others.

The former Manchester City manager’s strategies have revolved around a blend of tactical midfield organization and defensive solidity. The team has looked formidable with a combination of attacking flair, technical creativity and direct play. Mancini has employed a 4-5-1 and a 4-3-3 formation which has added robustness in the defensive set-up and technical sharpness for building attacks from the midfield or even creating chances through open play via short passes or through set-pieces.

The Azzurris made it to the semi-finals of the 2016 Euros under Antonio Conte’s guidance while they suffered an early exit in the group stage in the 2014 World Cup. Since the last decade or so except for the 2012 euros when the team made it to the finals, the Azzurris has made a limited impact in international events but this performance gives enough evidence that the team could be a big force in the future.

Mancini has managed to reestablish and transform the team with his expertise, experience, and gifted vision. Every department has added assuredness with its technical creativity. Mancini opted to keep Ciro Immobile and Andrea Bellotti at the front while employing Lorenzo Insigne and Federico Chiesa who has looked in prime form at the left and right-wing respectively. Bellotti was made to play a bit deep against sides who were more physical at the wings.

The midfield consisting of young Nicolo Barella, Marco Verratti and Jorginho alongside Manuel Locatelli have looked technically adapt and have managed to build pressure on the opposition’s defence with their organized distribution. The defence consisting of Francesco Acerbi and the experienced duo of Leonardo Bonucci and Giorgio Chiellini has looked rock solid at the back as always with their authoritative and tactical assuredness. In 37 games as manager Mancini has lost only twice. The Blues are unbeaten in their last 33 games. They have scored 12 goals in the competition so far conceding only 3 goals.

Italy has adapted well by changing its style of functioning

The Azzurris have shown tremendous adaptability in all departments depending on the opposition’s game plan and Mancini and the team management have made smart substitutions to surprise the opponents with some unexpected yet effective alterations. Italy’s win over world no 1 Belgium in the quarter-finals was a fine exhibition of a system that focused on aerial distribution from the wings and creative play from the midfield to create short passes.

Against Spain, in the semi-finals, Italy looked penetrative with its offensive play but after Alvaro Morata’s equalizer, they changed their style of play and looked defensive from the centre. Roberto Mancini has been on target with his man-management and while picking the right combinations. This Italian outfit needed someone who could lift their spirits, add some tactical revision and fine-tuning their temperamental aspects.

Mancini is the right man to guide them and the manager has created an environment where every player senior or junior can put his issues before him. Understanding the intricacies of the selection policies Mancini can work wonders with this outfit and lifting the Euros title would surely be a big boost ahead of next year’s World cup in Qatar. The team is moving in the right direction and if the Azzurris maintain consistency then they could be a real force in the future.