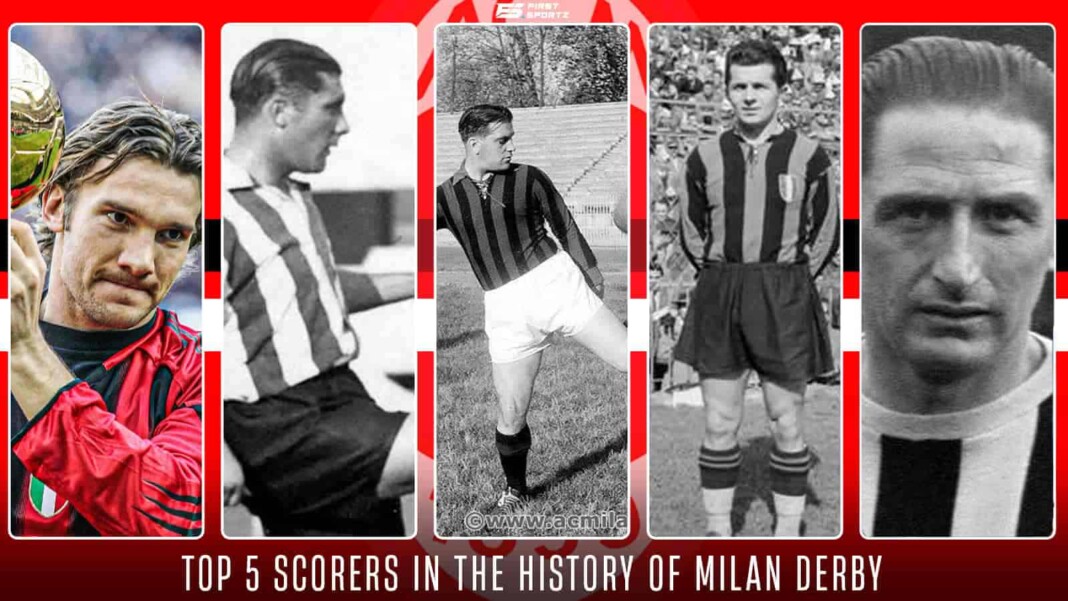 The Derba della Madonnina or commonly known as the Milan Derby is played between AC Milan and Inter Milan for more than a 110 years now. The first Milan Derby was played in 1908 in the finals of Chiasso Cup and since then we have been witnessing one of the most fiercesome rivalry in the history of football.

The match between these two teams in most of the competitions are played in San Siro as both the teams share the same home ground for years now. Today we will be taking a look at the top five players who have scored the highest number of goals in the Milan Derby and there are certain players also who have played for both the Milan teams, let’s have a look.

Enrico Candiani has been one of the many players who have played for both Inter Milan and AC Milan. He was one of a kind and had incredible attacking prowess, who had an eye for goal. He has played 187 matches for Inter Milan and has scored 71 goals while in 22 matches for AC Milan he has scored eight goals.

Istvan Nyers one of the greatest Hungarian legend played as a striker for Inter Milan from 1948-1954. He has scored 133 goals in 182 appearances for the Nerazzuri.

Istvan Nyers has scored 11 goals in 12 matches against AC Milan and is till date the only player to have scored the highest goals in the Milan Derby for Inter Milan, who is not an Italian.

Gunnar Nordahl the Sweedish striker spent majority of his career playing for AC Milan from 1949-1956 and he still remains the highest scorer in the history of Rossoneri with 210 goals in 257 appearances.

Gunnar Nordahl has scored 11 goals in the 15 matches that he played against Inter Milan in the Derby Milano and comes in the third position in the list. His aggressive mentality and an eagle for the goal still remains as example for other footballers in the world.

Giuseppe Meazza dedicated his entire lifetime to the Italian Football and has also played a major role in Italy winning the 1934 and 1938 World Cup. He remains as the greatest player in the history of Inter Milan and is also till date the highest scorer with 242 goals in 365 appearances for the club.

He has not only played for Inter Milan but has also spent a couple of years in AC Milan too where he scored 9 goals in 37 appearances. Meazza has scored 12 goals for Inter Milan and 1 goal for AC Milan in total of 27 matches that he has played in the Milan Derby. He thus comes second in the list with 13 goals in his tally.

The Ukranian Ballon D’or winner still remains as one of the legendary striker in the history of AC Milan. In his 8 years time with AC Milan he has scored 175 goals in 322 appearances and is the second highest goalscorer in the history of the Rossoneri.

Andriy Shevchenko stands as the only player to have scored the highest number of goals in the Milan Derby. He has played in 20 Derby Milano and has scored 14 goals. He won the UEFA Champions League with AC Milan in the 2002/03 campaign.