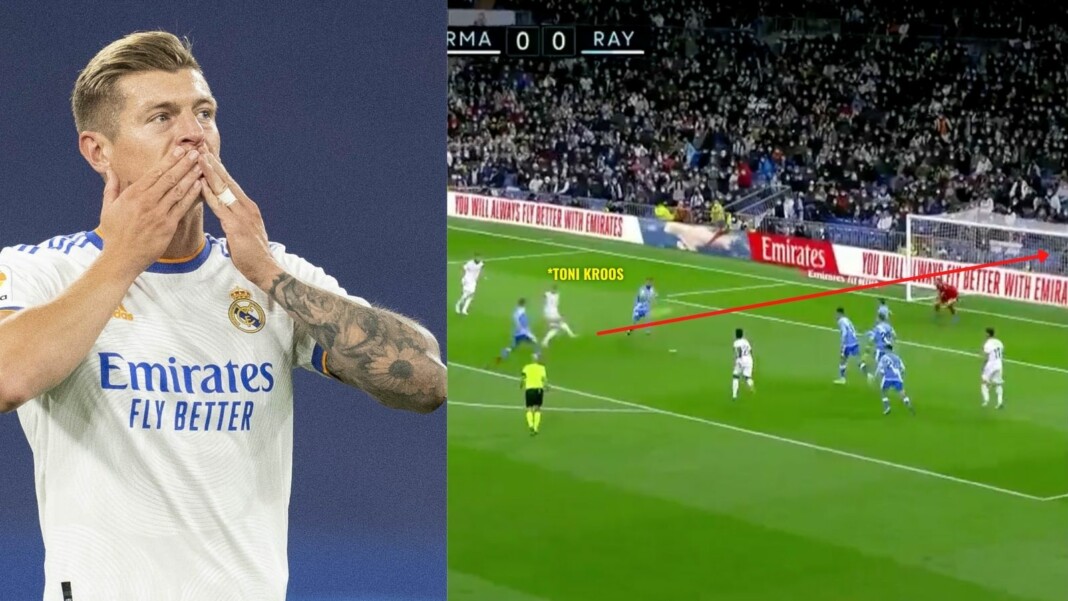 Real Madrid’s Toni Kroos has just scored a banger at the 14th minute mark of their ongoing match against Rayo Vallecano on Matchday 13 of Laliga 2021-22 and Madridistas from around the world are going bonkers over it on social media.

The German midfielder rarely scores goals as distribution is what he mostly focuses on but when he does, the world watches. And today was no different.

Rayo Vallecano had created quite a buzz after defeating FC Barcelona 2 weeks ago by a narrow margin of 1-0. The newly promoted side has had a dream run in the La Liga so far. They are currently placed 6th on the points table and Real Madrid had all the reasons not to take them lightly. However, from what we have learned in the match so far, Carlo Ancelotti’s men have been successful in nullifying Rayo’s counters pretty efficiently and La Casa Blanca have been dominant in all phases of the game.

Just 14 minutes into the match, Real Madrid created a brilliant chance that started with a long ball from Eder Militao at the back. Vinicus Junior, who was at the other end of it, made a scintillating run right through Rayo Vallecano’s defensive line and made a through pass to Marco Asensio who squared it inside the box into a no man’s land. Toni Kroos, who had already started sprinting into the box, slotted it beautifully into the top right corner with a thunderous strike off the volley.

The Los Blancos didn’t have to wait much for their second goal as they got it right before the Half Time mark through their captain Karim Benzema. This is the Frenchman’s 10th league goal this season and he is already miles ahead of any other player on the list of highest goalscorer in La Liga 2021-22. This is probably Benzema’s best shot at winning the Pichichi award.