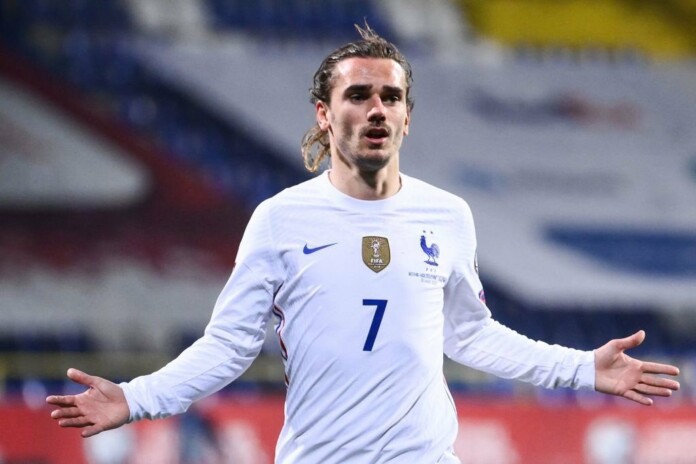 France are playing a Bulgaria, at the Stade De France in their final pre-Euro 2020 warm-up friendly match. The Les Bleus have taken the lead against the Bulgarians courtesy of a Antoine Griezmann goal.

Antoine Griezmann has now scored 37 goals for France and is just 15 goals shy of Thierry Henry to become the highest goal scorer for his national side. He is currently on the 4th spot behind Michel Platini, Oliver Giroud and Henry.

The goal came in the 29th minute of the match from an inspirational bit of play from the Barcelona forward. Kylian Mbappe tried a few tricks of his own inside the Bulgarian penalty box, and delivered a low cross.

The low cross deflected off a defender and looped up in the air nicely for Griezmann was waiting just inside the box. He went for the extraordinary- overhead kick and displayed incredible technique in his shot.

His acrobatic scissor kick took a deflection off Chochev’s head and nestled into the back off the net to give them the lead.

However, despite being in the lead France will have concerns of their own as returning forward, Karim Benzema was subbed off in the 38th minute of the match days before their first EURO 2020 match. The striker picked up a knock during the match and seemed too have hurt his knee and later on signaled to the bench to be substituted.

The injury did not look to bad at first viewing but concerns would remain until something is confirmed from the French camp.