Even on occasions, where Hamilton has taken pole position in the qualifying session, he has been out-raced by the Dutchman on the final race day. Be it because of Mercedes’ failing strategies or because of the engine upgrade to Red Bull, the Austrian team has managed to win the last five Grand Prix and portray no good reason to not cause an upset at Silverstone.

Formula 1: How Can Lewis Hamilton Make a Comeback at Silverstone – British GP

Lewis Hamilton has been completely outdone whenever Max Verstappen has been on his medium tires. Given that Red Bull has had the relative engine boost with Honda, their strategies have also managed to help Verstappen in particular to counter the pace of Valtteri Bottas and Lewis Hamilton.

The mood of the Mercedes ace can hardly have been helped by the fact that his teammate Valtteri Bottas, who has been short of form and confidence, was sandwiched between Verstappen and himself. However, recent experience provides encouragement to the Briton. For at the last race in Azerbaijan he was 11th on Friday only for a transformation to put him in contention for a podium finish.

Having said that, Lewis Hamilton and Mercedes need to come up with a strategy wherein they could not only use their pace in the initial stage to better use. But only use Barcelona’s strategy of 2 pit-stops more effectively to catch up on the pace of Verstappen. With Bottas getting the better of Sergio Perez, Hamilton might need the initial help of Bottas in order to reign better of the Dutchman at Silverstone.

Also Read: Formula 1: Why Red Bull’s Wins Are Getting Easier Race After… 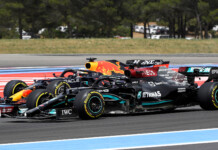