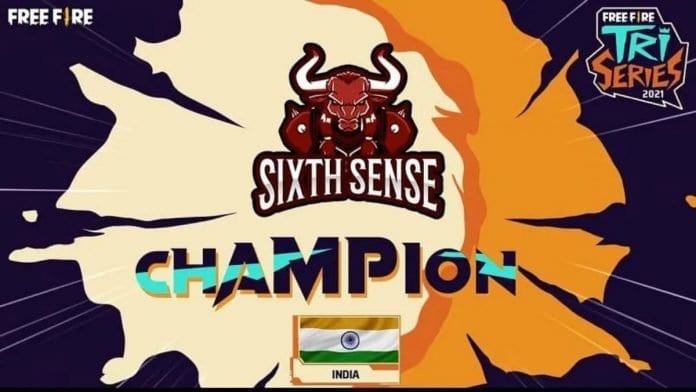 Free Fire Tri-Series 2021 finals concluded today after an exciting day of play. It featured 12 teams from three countries India, Pakistan, and Bangladesh, who had earlier qualified through the group stage.

The teams competed for a prize pool of $50,000, and at the end of the day, Sixth Sense emerged as the champions, bagging the winner’s prize of $22,000. They finished with 91 points and 38 kills, as the top three spots were all bagged by Indian teams.

The finals day started with the first match being played in Bermuda. It was won by Nemesis with six frags, while Sixth Sense finished in second place with nine frags. Team Chaos was third after bagging nine frags.

The second and the third matches of the day, played on Purgatory and Kalahari, were won by Team Elite and Riot, adding 13 and seven kills to their respective tallies.

Match 3 marked the halfway stage in the finals. At this juncture, Team Elite, through a series of consistent performances, stood at the top of the points table with 63 points and 22 kills.

The fourth and fifth matches were played on Bermuda and Purgatory. The wins in these matches was claimed by Demons Pride and Nemesis, with seven and six kills, respectively.

In final match, the competition between the top three teams was cutthroat, as Team Elite and Sixth Sense had an equal number of points, i.e., 79. Nemesis wasn’t far behind in third place with 66 points.

The sixth and final match of the finals was played on Kalahari. Team Swag won with eight kills, while Sixth Sense secured 12 points to narrowly clinch the Free Fire Tri-Series 2021 finals.

TE Pahadi from Team Elite was declared the MVP of the Free Fire Tri-Series 2021 as he secured the highest number of kills (75) and dealt overall damage of 40417. He also won the MVPs prize of $1,000.