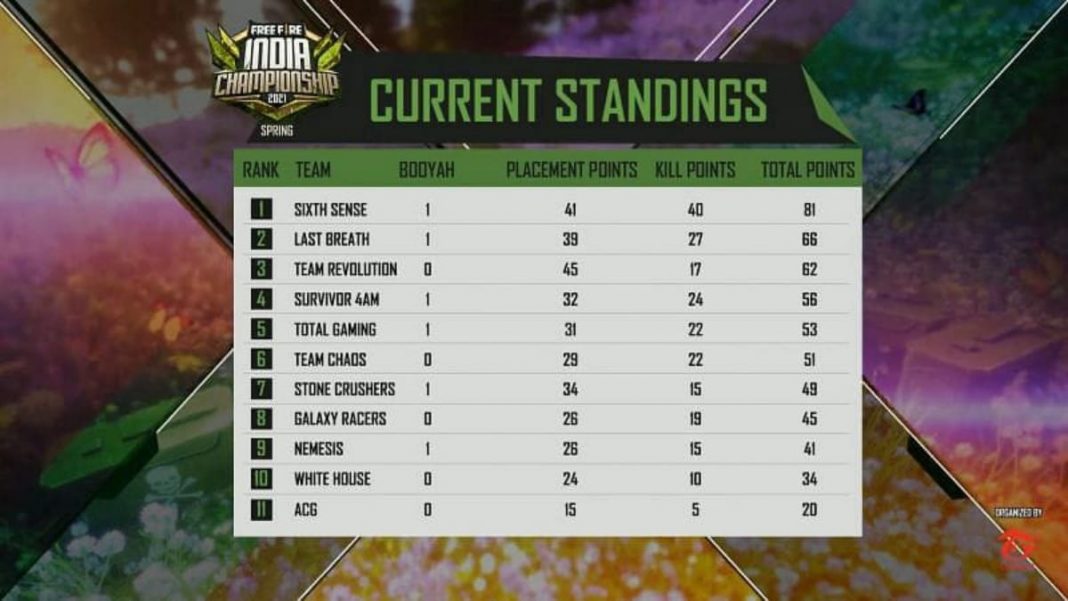 On the rise of day-5 Group A & C were ready for the battle. A series of 6 matches were played on the various maps of FreeFire. The players were all ready to go on in a battle to fight for the glory and have a taste of Booyah! We will discuss the FFIC League Stage 5 standings.

The Day-5 ended with a day full of action. At the end of the day Sixth Sense topped the day with 40 kills and 81 points. Last Breath came at second place with 28 kills and 66 points. Team Revolution followed them with 17 kills and 62 points securing a third place for their team. The MVP of the day was MRJAYYT the Fragger from Sixth Sense totalling his kill to 43 kills in 11 matches.

The day-5 kicked off with the first match played in Bermuda map Stone Crushers stole the victory with 5 kills. Sixth Sense played aggressively and topped with 10 kills.

The second match started in the terrain map of Purgatory. The fan favourite Total Gaming eSports secured the win with 5 kills. Last breath fragged 6 kills in the match.

Third match begun at the desert map of Kalahari Survivor 4 AM played aggressively and secured an 8 kill Booyah!. White House followed them with 5 kills to secure the 2nd place.

The fourth match was the most exciting as it was played in Bermuda. The Sixth Sense dominated the whole match and bagged Booyah with 12 kills. Their fragger MRJAYYT alone fragged 9 kills securing the title of MVP for himself. Galaxy Racers came at 2nd place with 9 kills.

In the fifth match on the highlands of Purgatory Last Breath swept the match with 17 kills Booyah. Team Revolution and Team Chaos followed with 4 and 3 kills.

The sixth and last match of the day was to on the desertland of Kalahari. Nemesis bagged the Booyah with 6 kills. Both Total Gaming eSports and Sixth Sense played aggressively fragging 11 and 9 kills.

Also Read – Skyler Character in Free Fire: All You Need to Know