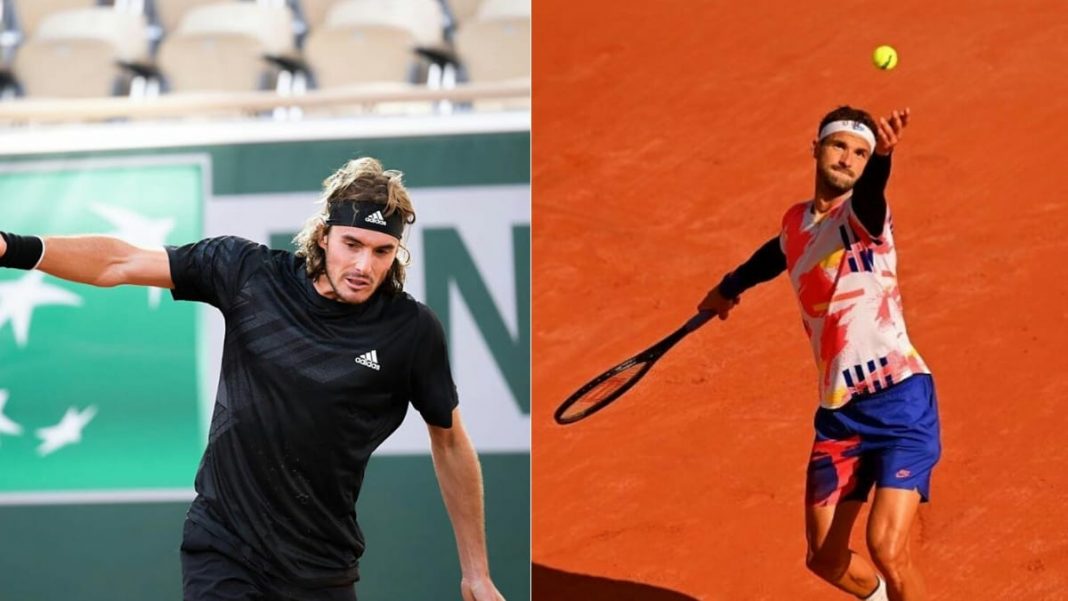 Stefano Tsitsipas, 5th seed at the French Open 2020 will face 18th seed Grigor Dimitrov in the last 16 on Monday. The 5th seeded Greek got the better of Aljaz Bedene in the 3rd round as Bedene had to withdraw from the match halfway into the 3rd set.Tsitsipas was up 2 sets before the walkover was handed. His opponent for the 4th round, Dimitrov was also handed a walkover in the 3rd round by his opponent, Roberto Carballes Baena who wihdrew after being 2 sets down.

Stefano Tsitsipas, has looked impressive in the opening rounds of the French Open after his 5-set match against Jaume Munar in the 1st round. The Greek came back from 2 sets down to beat Munar in 5 sets. In the 2nd round, the 5th seed defeated Pablo Cuevas in straight sets. In the Round 3 match against Aljaz Bedene, he was up 2 sets before his opponent withdrew from the match owing to an injury. As a result, the Greek No.5 seed progresses into the last 16.

Grigor Dimitrov has been playing his best tennis on clay this French Open. The Bulgarian has not dropped a set yet in his opening 3 round matches. In the first round, he defeated G.Barrere before cruising past Andrej Martin in the 2nd round. Like his 4th round opponent, Stefano Tsitsipas, the Bulgarian was also awarded a walkover in his 3rd round match against Roberto Carballes Baena after being 2 sets up.

The duo have never faced off against each other in the past and the head to head record stands at 0-0.

The 4th round match between Tsitsipas and Dimitrov promises to be a thriller with both the players backing their chances to progress into the next round. After his 1st round hiccup, Tsitsipas has recovered well and has played quality tennis in the next 2 rounds. His opponent, Grigor Dimitrov has not dropped a single set so far and has the potential to defeat top players on his day. The match will be a tense and an intriguing encounter which can go either way. The number 5 seed, Tsitsipas just gets the edge in this encounter owing to his improved perfromances.