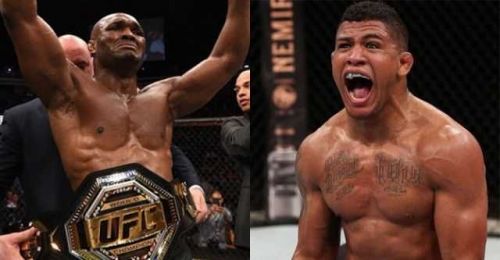 Former heavyweight champion gives his opinion on the Fight Between Burns and Usman. Woodley has faced both of them in his last fights. He lost to both the Men by a wide margin. Recently he used his experience with both men to give his analysis on the fight result.

As a guest on UFC Unfiltered, T-Wood broke down the fight and seemed to give Gilbert the advantage

“He has power. He has more power than Usman. He’s a better grappler than Usman, jiu-jitsu wise, but I think the striking – he may not be better, but he does punch a little bit harder, and it’s going to be a point where it has to go to the ground. We all just can be real: Gilbert’s gonna win that ground fight. Maybe not from his back, but if he finds a way on top or a position where he can take the back, it’s a problem.”

“Whether you like watching him take Masvidal down or not, he never did one takedown against Colby, and Leon Edwards he struck and when it was time to take down, he went for the takedown. So he’s very good at putting it together, and he’s going to have to do that against Burns.”

Usman (17-1) vs (19-3) has not been announced officially, as of yet. UFC president Dana White has stated that it will be a thing. Burns was originally supposed to challenge Usman for the title at UFC 251, but tested positive for COVID-19 and was replaced on short notice by Jorge Masvidal. Usman largely dominated Masvidal and took a wide decision victory. Burns is expected to challenge for the title some time in late 2020.

Also Read: Laura Sanko Afraid of Amanda Nunes; Says “Regardless of what I weigh she would murder me”