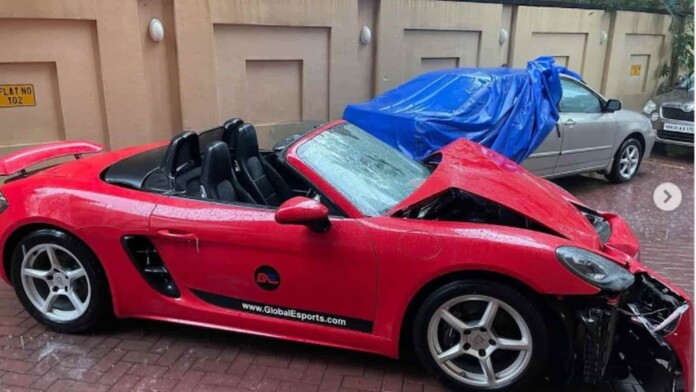 Dr. Rushindra Sinha, the CEO of Global Esports suffered a severe loss in the last hour due to the cyclonic Tauktae prevailing on the coast with weather that is haunting Mumbai for the last few hours. Dr. Sinha uploaded a photo of the incident and captioned it with “Cyclone Tauktae claims another victim” while referring to his Porsche.

A very severe cyclonic storm with winds gusting up to 185 km per hour had begun making landfall on the Gujarat coast from Monday night. Over 1.5 lakh people have been evacuated safely in the state. The center of the cyclone will cross Saurashtra coast to the east of Diu within the next three hours, said the India Meteorological Department.

Dr. Sinha, the CEO of Global Esports, an eSports organization from India, had his beloved Porsche battered in the cyclone Tauktae. He had posted a video on his YouTube channel and posted on Instagram as well about his loss. “Cyclone Tauktae has taken another victim… my new porsche 718 convertible has been completely destroyed. I explain all the events that happened in this video… R.I.P to my car but everyone please stay indoors and stay safe”, he had said.

It seems from his Instagram post that he is not very happy about the Porsche insurance as it could not withstand a mere cyclone. “Cyclone Tauktae claims another victim…. Thankfully no one was injured or hurt [email protected]Porsche you and I have a problem and we need to talk about it. Full video coming on my YouTube channel”, he wrote in his post. This Porsche has been an integral part of Dr. Sinha and boasts the logo and information of Global Esports. The images show that the front side of the car has been dismantled. The hood and bumper have sustained maximum damage from the front and sides as well.

While there were sad reactions from Dr. Sinha’s acquaintances, he urged everyone to be safe amidst this cyclone because of course, lives are more important than material belongings.

Also Read: Valorant: 5 Best NA Valorant Players as of May 2021