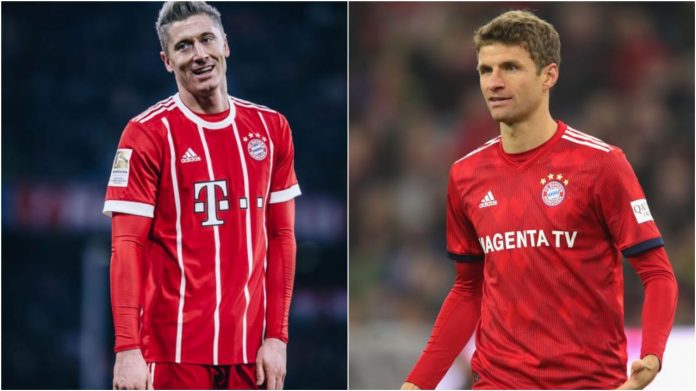 The strikers we are about to discuss have different skill sets, technical features and temperament but they have played a big role for their respective sides. The list consists of experienced as well as some upcoming faces who are trying to make their mark.

Some are efficient and prudent with their goal-scoring abilities while some are more authoritative with their ability to build up play or using their creative sense to create opportunities. Some have even showcased a combination of all these qualities. By taking all these aspects into account we have prepared a list of 5 best goal scorers in the Bundesliga at the moment. Let’s take a look at 5 such strikers who have impressed the most.

The 32-year-old is still going strong and has showcased some powerful performances this season. Lewandowski has played with an attacking mindset right throughout his career and this season is no different. The Poland International has outrun his opponents with his speed and electric counter attacks. Lewandowski has led the forward line from the front all these years for the Bavarians.

The striker has formed a deadly combo alongside Thomas Muller in the front and together the duo are looking unstoppable at the moment. Lewandowski has combined well with forwards Serge Gnabry and Leroy Sane. His on-field understanding with midfielders Joshua Kimmich and Leon Goretzka has looked sharp. Whether it is scoring goals through set pieces or open play Lewandowski is a deadly operator. He has scored 24 goals in 19 games with 6 assists to his name so far this season. The former Borussia Dortmund FC player has also scored 3 goals in 4 Champions League games so far. Manager Hans Dieter Flick will hope the striker continues with his fine run.

Looking at his current form and recent performances the German is not showing signs of slowing down. Muller is a big threat inside the box because of his reach and his ability to score from difficult positions. He has scored 10 goals in 20 games so far with 11 assists to his name this season. Muller has netted 1 goal in 6 Champions League games this season with 3 assists to his name.

The 21-year-old has taken the Bundesliga by storm with some exciting brand of football. Haaland has showcased his speed more efficiently against sides who are defensively stronger at the flanks and during set-pieces. Haaland’s reach allows him to time his jump during set-piece situations. His skilful dribbles and pace have added intensity in the forward line.

His ability to build-up play can take the opposition by surprise. The Norwegian has enjoyed a fine on-field understanding with Jadon Sancho in the forward line. The striker has co-ordinated well with midfielders Emre Can, Thomas Delaney, Julian Brandt and the experienced Marco Reus. The former Red Bull Salzburg player has netted 14 goals in 15 games so far this season with 3 assists to his name. The striker has also scored 6 goals in 4 Champions League games so far this season. Manager Edin Terzic has shown immense faith in the youngster’s qualities.

Silva’s red hot form has been one of the biggest advantages for the Eagles. The Portuguese has showcased his ability to run through the opposition with his accelerating runs and brilliant finishes. The 26-year-old has added fluency and authority in the forward line.

Silva can create opportunities with his clever passing that can surprise the opposition during the run of play. His neat co-ordination with midfielders Stefan Ilkansen, Sebastian Rode, Filip Kostic and Aymen Barkok has added reliability and stability in the midfield. Silva has worked well with Amin Younes in the forward line. The striker has scored 16 goals in 18 games so far this season with 3 assists to his name. The former AC Milan has notched up 2 goals in 9 Europa League games so far. Manager Adi Hutter had stated that Silva has the quality to take his game to the highest level.

The youngster from Jamaica is one of the most happening names in European football at the moment. The 23-year-old has showcased his all-round skills with some brilliant performances. Bailey has outsmarted the opposition with his electric runs and creative dribbles.

Bailey normally plays as a winger but the forward can play offensively as well as defensively while moving forward. He has teamed up well with midfielders Julian Baumgartlinger, Kerem Demirbay, Florian Wirtz etc. Bailey has coordinated well with forwards Mousa Diaby, Patrik Schick and Lucas Alario. Although he has netted only 4 goals in 18 games this season Bailey has contributed with 6 assists. The winger has scored 5 goals in 6 Europa League games so far with 2 assists to his name. Bayer Leverkusen director Rudi Voller had stated that the Jamaican is blessed with enough skills and quality. Manager Peter Bosz too, has expressed confidence in the former KRC Genk player’s abilities.

Also Read: Liverpool and RB Leipzig to play first leg of the Round of 16 tie at Budapest after Germany banned travellers from United Kingdom