Sri Lanka legend Muttiah Muralitharan is undoubtedly the greatest spinner to grace the game. And he is also the fastest bowler to breach the 400 wicket mark in Test cricket. It took Muralitharan only 72 Tests to complete 400 Test wickets. It took him only 51 more red-ball games to double the count as he retired with 800 wickets in 133 Test matches. He is the all-time highest wicket-taker in the history of Test cricket.

Second in the list is the Indian maestro Ravichandran Ashwin. He joined the elite list with seven wickets in the ongoing pink-ball Test against England. Ashwin took 77 Tests to breach the milestone becoming India’s fastest bowler in the process. Sir Richard Hadlee and Dale Steyn who took 80 Tests for the milestone are the joint third on the list.

Also Read | When was the last time a Test match ended within two days? 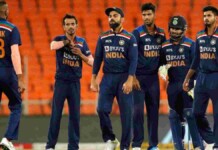 T20 World Cup: India to play against England and Australia in warm-up games