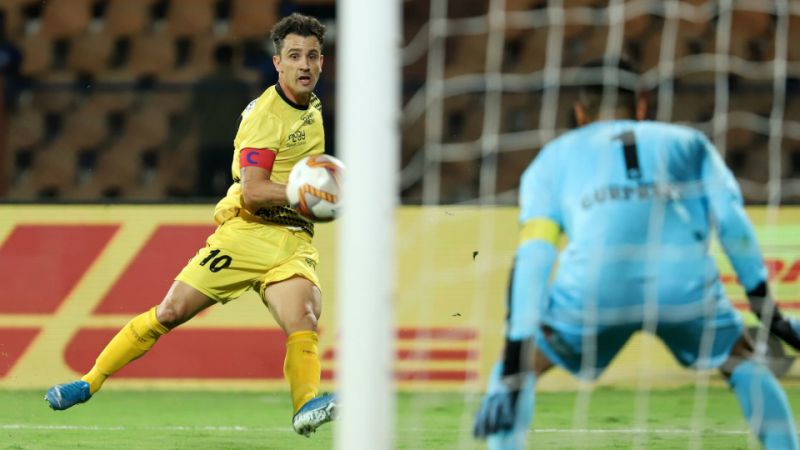 Hero isl match 74 FC Goa vs Hyderabad FC was played in Fatorda Stadium on 5 Feb. under the command of referee Raul Gupta. This article covers some of the key things that happened during the game. The FC Goa ran over Hyderabad like a train with no brakes.

An absolute destruction on field with a 4-1 victory by FC Goa left Hyderabad fans stunned. Hugo Boumous(19′,50′) and Ferran Corominas(64′,87,) both scored 2 goals each for Goa and Marcelinho(64′) broke the duck for Hyderabad. After this game FC Goa remained at the top of the table with 33 points in 16 matches whereas Hyderabad remain at the bottom with 6 points only. FC Goa showed total dominance in the game from the beginning of the game as in first half of the game they had many chances created but missed and had only one goal lead which could have been more. Survival was the name of game for Hyderabad at this moment as Goa was hitting harder but missing either the goal or getting deflected by the goalpost.

As the second half started, in the 50′ minute Goa scored again making the score board 2-0 and the difficulties for Hyderabad were increasing. In the 64′ minute finally Hyderabad broke the duck as marcelinho scored an astonishing goal by free-kick which hit the top bar and went in, no chance for the keeper to save it. Before Hyderabad started to think that they have a chance for comeback, Boumous made a brilliant pass tearing down the defence and left Coro with an easy finish making the score line 3-1. Minute 85 was the scary moment for Hyderabad as  Coro went down due to a tackle by L.Kattimani, which ended up in a penalty reward for already winning FC Goa. Coro converted the penalty into the bottom corner and the score line read 4-1.

The next match is on 6 Feb 7:30 pm between Mumbai city and Jamshedpur.