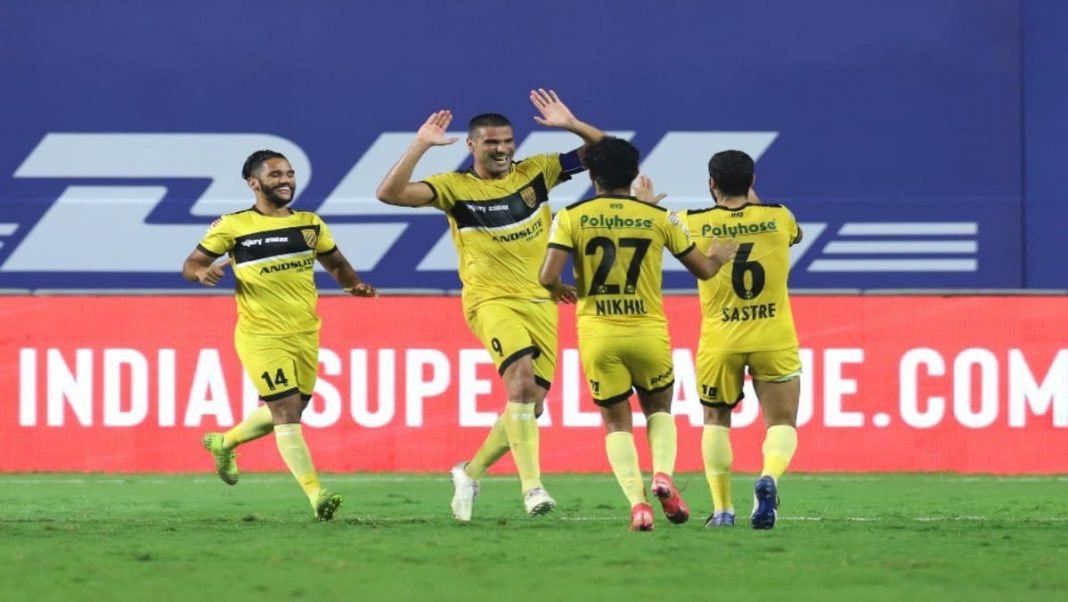 Kerala Blasters were officially knocked out of the Hero Indian Super league after suffering the biggest loss of the campaign. Hyderabad FC defeated Kerala Blasters FC 4-0 at the Tilak Maidan in Goa.

A brace from Francisco Sandaza and a goal each from Santana and Victor completed the rout for Hyderabad. The win put Hyderabad FC 3rd in the league table and put them into contention for qualification into the semis.

Hyderabad FC still have their fate in their own hands

Hyderabad looked livelier towards the end of the first half but it only showed when Joel Chianese shifted from the flanks towards the middle. The first half ended 0-0 as both teams lacked that final pass despite playing well throughout.

Football is a game of 2 halves and the story couldn’t have been better for Hyderabad. In the 58th minute, Sandaza broke the deadlock when he stabbed home from close range after a miscommunication in the Kerala defence.

Four minutes later , a Albino Gomes helped Hyderabad get a penalty and Sandaza made it 2-0. Hyderabad kept piling on the attacks and were duly rewarded with a goal in the 86th minute when Santana grabbed his first goal of the game. Santana remained influential for Hyderabad and provided the assist for the final goal. Victor had an easy tap-in to score after Santana’s pinpoint cross.

Hyderabad FC now have 27 points from their 18 games and climbed to 3rd position. Kerala Blasters are now the second side, after Odisha FC to be eliminated having mustered only 16 points from as many games.