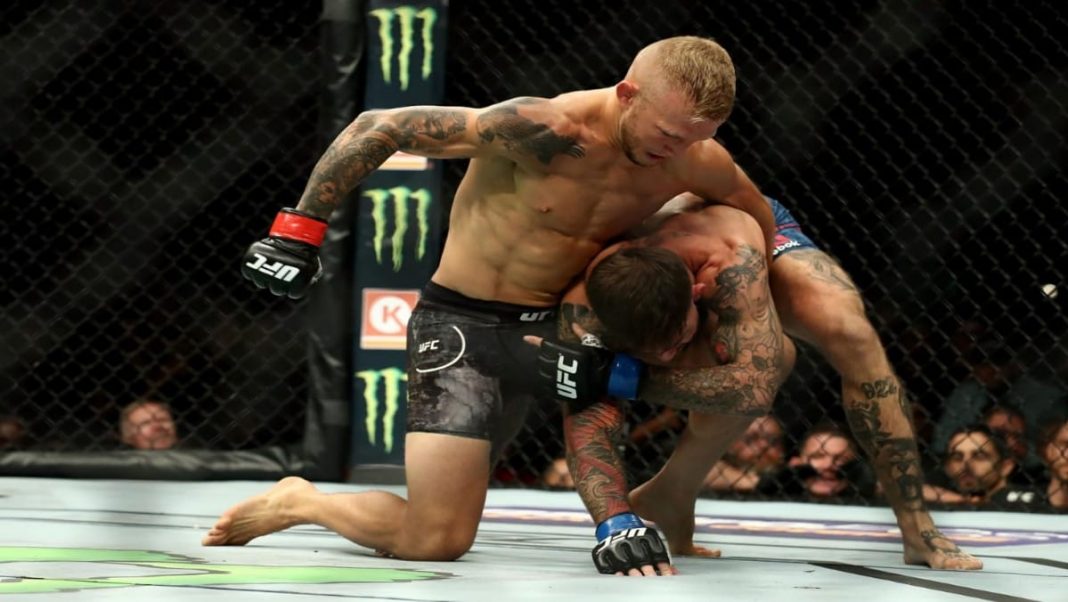 In the post-fight interview, Burns said he gone over aggressive in that fight and went ‘Cody Garbrandt crazy’ referring to ‘No Love’ for losing his Bantamweight championship to his former teammate T.J. Dillashaw.

Coincidentally Cody Garbrandt also talked about the same thing before UFC 258. In a podcast with Joe Rogan, Garbrandt says, “Definitely and that’s not me, so for me to go in there and have that, just an example of I don’t need to do that.”

“It was great, I was a world champion, I feel like I needed to defend it, a lot of other stuff, the backstory of it, the injury coming off a year. I was just so not mentally ready to go in there and fight that I physically overcompensated for it.”

“I feel like T.J. caught me at a time where mentally I was not in the best state of mind to go in there and be a champion and that’s why it was taken from me, He capitalized and I look back on it, I kept going back to those fights, and it’s a little bit of insanity.”

“You have to be insane to repeat the same thing expecting a different outcome and that’s what I was doing… Looking back, hindsight is 2020 always in a fight, but I’m thankful for that. I feel like if I would have gone off and defended the title,”

“I probably wouldn’t have been as hungry and motivated as I am today and that’s going to help me out for the next five years of my career or however long I’m going to fight for.”

Garbrandt believes he will meet Dillashaw again in future

After losing two back-to-back fights against T.J. Dillashaw, Cody Garbrandt faced a loss against Pedro Munhoz before finally getting a spectacular win against Raphael Assuncao in his last fight.

Talking about again fighting for the championship, Garbrandt says, “Staying enthusiastic, I think that’s the main thing, I wasn’t enthusiastic. I felt like I was just going through the motions.”

“There’s a lot of other things, a lot of things can transpire but I’m solely putting blame on myself because that’s all I can control. What I do, how I react to things, and I wasn’t the person that I am during those kinds of tribulations in my life. I’ve grown from that. I was 24-25 years old. I’m 29 years old now. I look at the game differently.”

Along with this, he is confident to face Dillashaw in the future once again. Garbrandt added, “It’s not to say I didn’t like T.J. I don’t agree with a lot of the things that happened but that’s so far in the past, I’m past that,”

“But definitely, taking that in there, my mental state was not what it should have been to go against a guy like T.J. We can fast forward to when he got popped and this and that, T.J. can be on that stuff.”

“He can be on that stuff and he still can’t beat me when I’m focused and I’m mentally there and I’m in there and I’m excited. I’m glad that he’s coming back. He’s got to prove to himself and that’s a big fight for me to come back to in the future. That’s gonna happen.”

Also Read: “Shave an MC into your chest hair and I am YOURS Happy VDay and Congrats, my love!” Miley Cirus surprises Julian Marquez