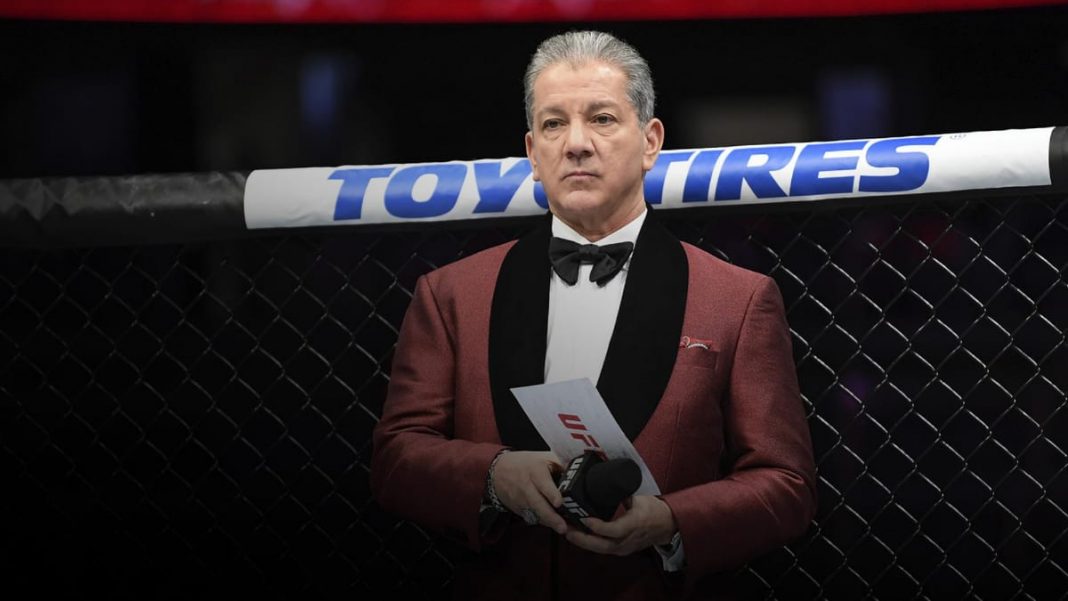 Bruce Buffer – one of the greatest sports announcers of all time, just completed 25 years in the UFC. ‘The Veteran voice of the Octagon’, as he is fondly known, has been with the UFC since UFC 8 (February 16, 1996). His phase catchphrase ‘It’s time’ has become a luminary, reaching all corners of the world.

Speaking at the UFC 258 post-fight conference, Buffer discussed a myriad of topics; from his feeling about completing 25 years in the organization to his retirement plans.

‘This is a huge honour for me‘

Speaking about completing 25 years in the UFC, Buffer said, “You know, it feels amazing! This is a huge honour for me…You know how passionate I am, about being the voice of the octagon and working for Dana..I love it. My passion just keeps getting stronger. I wish I had another 25 years, who knows? Because I am ready to rock and roll for 25 more.

I can’t even imagine 25, it’s just gone by so fast… I wanna thank the UFC for the beautiful tribute they did tonight. That really caught me like a side shot to the head and just so beautiful. Thank you, Thank you, my beloved UFC, thank you everybody.“

When asked, if he ever thought he would complete 25 years in the UFC, Bruce replied “Well, it’s 40 percent of my life. That’s a lot. You know, the one thing that I always tell everybody, back in 1996 when I got involved with the UFC. I realized it was going to be the biggest thing happening in fighting sports. I realized it was probably going to be the biggest thing in sports and that’s why I stuck with it.

“When you stick with something, when I set a goal, I stick with it to the end. I’m a loyal soldier… I love the honour of announcing these female and male octagon warriors. The greatest fighters in the world. Some of the greatest people I’ve met.”

The friendships I’ve made. The relationships, with the media, with fighters, with the people I work with…I love it! This is awesome.“

‘I did it my way, as Sinatra says‘

When asked about his retirement and the void Buffer would be leaving when he retires, a calm and humble Bruce Buffer replied:

“You know, when it comes my time, when I announce my retirement, which won’t be again for years. When my passion wanes, then I’m gonna retire. That’s just the way it is. I mean I’m the first one to cash the paycheck on a Monday morning at the bank like anybody else, but I’m not in this for the money, I’m in this for the love of what I do. I am a fan first and an announcer second.

And, as far as it never being the same, the bottom line is we all make our mark in life. And, when I leave, I hope people respect the fact that I gave always a 100 plus percent. I always gave my all. I always put my passion into it and enhance the moment for the fighters and for the fans. And, you know, I did it the way I did it.

I did it my way, as Sinatra says and somebody else will come along and do it their way. I can only answer for what I do, when I do it and I love what I do!“

Well, the voice has spoken. Although, Buffer has promised not to leave the organization anytime soon, his departure will clearly leave an unfillable void. If it is Wayne for Gotham City, it is Buffer for the UFC!

Also Read : ‘I think I got overexcited’ – Gilbert Burns reflects on his loss to Kamaru Usman at UFC 258!