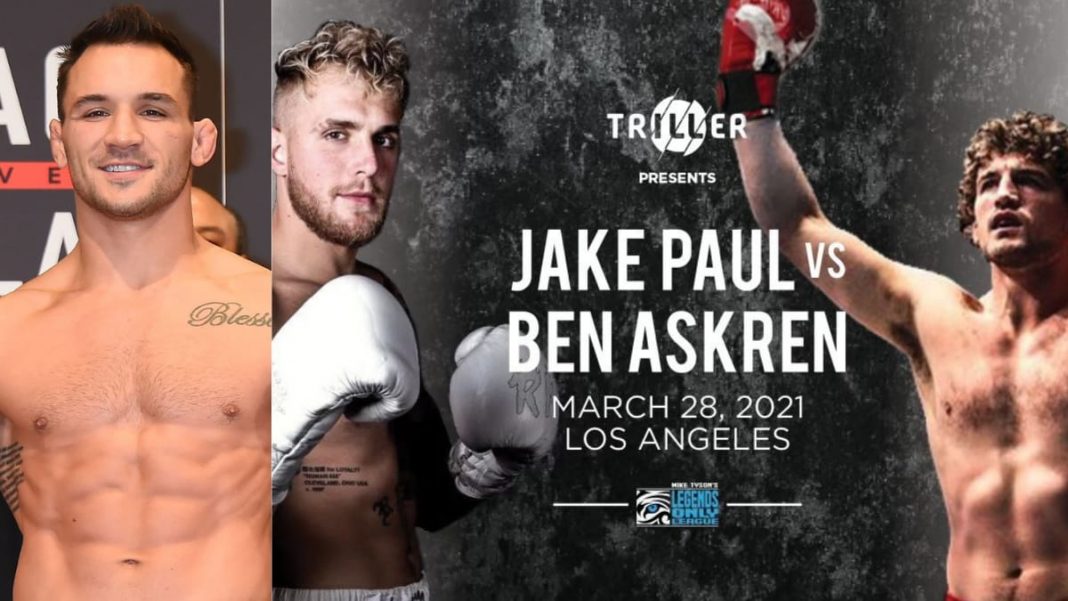 Ben Askren is set to take on Jake Paul in an-eight round pro-boxing match on the 17th of April, this year. Like it or not, the match will definitely be fun to watch. And likewise, UFC newcomer, Michael Chandler is all pumped up for the fight. Chandler has warned that people shouldn’t overlook his dear friend ‘Funky’ Ben just because he isn’t as good a striker as other mixed martial artists.

Speaking in an episode of The Pat McAfee Show, Michael Chandler revealed that he knows Ben Askren more than anybody else does and Jake Paul has chosen him as an opponent, since Ben isn’t the most talented striker, there is. He also added that YouTubers and other non-combat athletes taking up the sport is entertaining and good for the sport.

‘I guess it is good for the sport, it is entertaining and you will just keep seeing it more and more‘ – Michael Chandler

Michael Chandler was quoted as saying, “I love it man, I wasn’t sure it was going to happen. I just love every good thing that happens to Ben Askren. Say what you want about him. A lot of people don’t know him as I know him, he’s like a big brother to me, he’s a guy I would consider one of my best friends and teammates for life. I’m excited about it. Number one, let’s be honest, Ben isn’t the most talented striker. So, if you are Jake Paul you chose the right mixed martial artist to step inside the boxing ring.“

He continued, “But, I’m telling you right now, don’t overlook my man Ben. Number one, I hope he is getting paid a grip. Number two, I’m tuning in, I might even be there cage side or boxing ringside because that will be a fun one. I think it is awesome. Truthfully, I would never hate on anybody for making a living and doing what they are doing. The Paul brothers, fighting Mayweather and the basketball player and KSI. It is not real sport necessarily but it is fun to watch. I guess it is good for the sport, it is entertaining and you will just keep seeing it more and more.”

What are your thoughts on this? Can Ben Askren see off Jake Paul?

Also Read : ‘I can roll him up and smoke him like a blunt’ – Justin Gaethje on fighting Nate Diaz