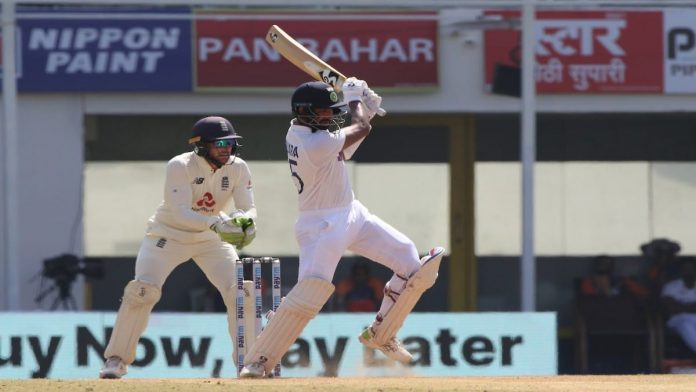 With a hefty aggregate on the board, England players- Dom Bess and Jack Leach walked the pitch on Day 3 when England were 555/8 (180). Soon the tail-enders were dismissed, and England put a total of 578 runs on the board, following which Indian batsmen walked down the pitch for their first innings.

However, England bowlers outplayed the Indian batsmen, and Team India was seen struggling in their home ground.

Rohit Sharma’s not-so-promising performance with the bat continued, and Shubman Gill’s fine form concluded after a good catch from James Anderson. Both Sharma and Gill fell cheaply and became the victim to Jofra Archer’s bowling.

After the unwanted batting performance from Virat Kohli and Ajinkya Rahane; Cheteshwar Pujara and Rishabh Pant rescued the drowning Indian Team. Together they wove a 119-run partnership after which Pujara was dismissed at 73. Soon after, Pant also got dismissed after playing a lion-hearted knock of 91 runs.

While India’s offie R Ashwin had difficulty spinning the bowl, the visitor’s off-spinner did it with quite ease. In fact, he did the trick for England as he scalped four major Indian wickets- Cheteshwar Pujara, Virat Kohli (c), Ajinkya Rahane and Rishabh Pant (wk). Besides, he maintained a phenomenal economy of 2.4.

Shubham Bhargava - June 15, 2021
Former World No. 1 Andy Murray is all set to take on Benoit Paire in the first-round clash of Cinch Championships 2021. The match...