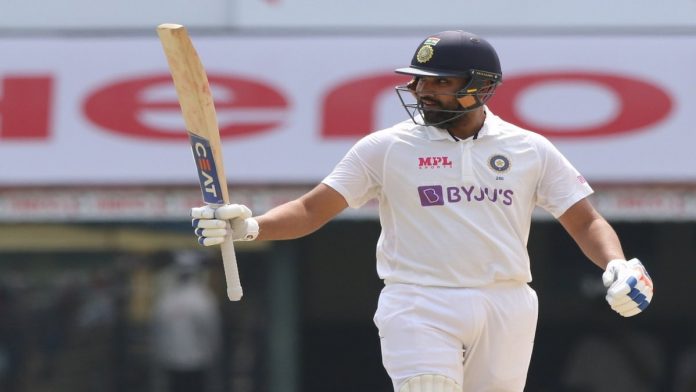 The discussion surrounding the Chepauk pitch for the recently concluded second test between India and England continues to lead to discussions. The pitch proved to be a turner right from day 1 and it led to the English batsmen struggling to stitch together partnerships as they fell to a huge 317-run defeat. Ravichandran Ashwin was the star of the show as he picked up 8 wickets and struck a century.

The other star was Rohit Sharma who scored a scintillating 161-run knock in the first innings to help India to a very good score. The opener was in a counter-attacking mood as he took on the English bowlers and flattened their attack. With the third test set to begin on the 24th and with all to play for, Rohit addressed the press today ahead of the all-important day/night test in Ahmedabad.

Rohit Sharma addressed the issue of the pitch while speaking to reporters and said, “Pitch is the same for both teams. I do not know why there is so much discussion about the pitch. Both teams play on the same turf and if people start talking about the pitch, I just want to say pitches in India have always been like this. I do not think there were any changes, everyone takes the home advantage, when we go outside, nobody thinks about us so why should we think about others? We should do things as per the preference of our team, this is what home advantage is all about.”

“If you remove the home and away advantage, tell the ICC to make rules regarding what the pitch should be. The same kind of pitch should be made in India and outside India as well. When we go outside, people make life difficult for us as well. I do not think pitches need to be discussed this much, talk about the players and their game. There should not be much discussion about the pitch,” he added.

He also spoke about focusing on the process and how the team must not think too far ahead. “To be honest, when we are playing the game, the focus is not on the outside. We want to qualify for the WTC finals, but we still to do a lot of things right to be there. We will be very happy to qualify for the WTC finals, but there are little steps that we need to take before we reach the finals. It is too far ahead still, we have got two Tests to play before that, we will see what happens after that,” Rohit said.

Addressing his knock in the second test, “I have mentioned earlier as well that I would not rate any of my knocks or put one ahead of another one, every knock you play comes under different circumstances and situations. All those knocks are very important, it was satisfying to play that 161-run knock in the second Test under pressure and get the team to a decent total in the first innings, it was very important from the team’s perspective. It was very satisfying to me personally,” Rohit signed off.