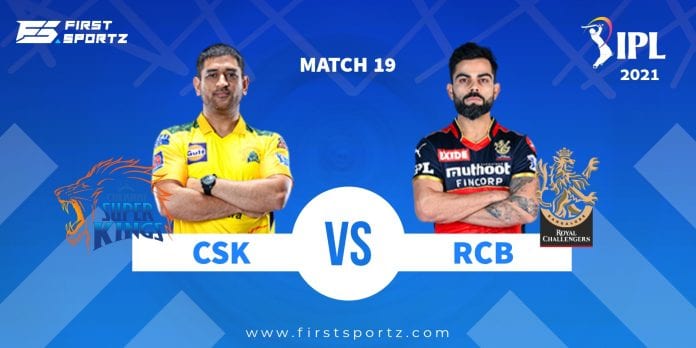 Chennai Super Kings (CSK) will face off against Royal Challengers Bangalore (RCB) in the nineteenth match of the Vivo IPL 2021 on Sunday, 25th April at the Wankhede Stadium, Mumbai. Both the teams are coming off the back of wins in their last match and would look to continue the good form.

Chennai Super Kings (CSK) are in excellent form at the moment as they have won three matches in a row. After a loss in the opening game against Delhi Capitals (DC), the MS Dhoni-led side has come up with a splendid comeback that has seen them batting with intent and exploding whenever needed.

In their previous match against Kolkata Knight Riders (KKR), openers Faf du Plessis and Ruturaj Gaikwad gave the side a spectacular start which was capitalized on by the middle-order who scored useful cameos to take the score past 200. Deepak Chahar then took four wickets to rock KKR before Andre Russell and Pat Cummins gave the Men in Yellow an almighty scare.

The bowling could thus, be a slight point of worry. However, CSK would fancy their chances of getting a win today.

Royal Challengers Bangalore (RCB) are flying high at the moment and the mood in the camp is upbeat as ever, as is evidenced from the various videos posted by the side’s social media handles. For the first time ever, the Virat Kohli-led side has won each of its first four matches and sit atop the table.

In their previous match against Rajasthan Royals (RR), the RCB bowlers delivered in the Powerplay by picking up four quick wickets before the opposition did a rescue act to take the score to 177. The score was then made a mockery of by Devdutt Padikkal and Virat Kohli with the former getting a century and the latter getting a fifty to remain unbeaten.

With such a comprehensive win, RCB would be confident of beating CSK as well.

The weather in Mumbai is expected to be hot in the afternoon hovering around 33 degrees Celsius. There would be no chances of precipitation.

The pitch at the Wankhede Stadium has produced run-fests and it would be no surprise if we see another one. On occasions, the pitch has produced swing and spin as well and if that is the case, the bowlers would get into the games. Team winning the toss would most likely opt to field first.

Both teams wouldn’t want to make too many changes to a winning combination.

Both sides are in terrific form at the moment. However, Royal Challengers Bangalore look near-unstoppable at the moment. They don’t seem to have a lot of weaknesses and at the Wankhede Stadium, the likes of Virat Kohli, Glenn Maxwell and AB de Villiers would love the ball coming on to the bat. RCB might thus win this one.

Shivansh Thakur - June 13, 2021
UFC 263 was one of the biggest cards of this year, which featured the most awaited rematch between the UFC Middleweight champion, Israel Adesanya,...