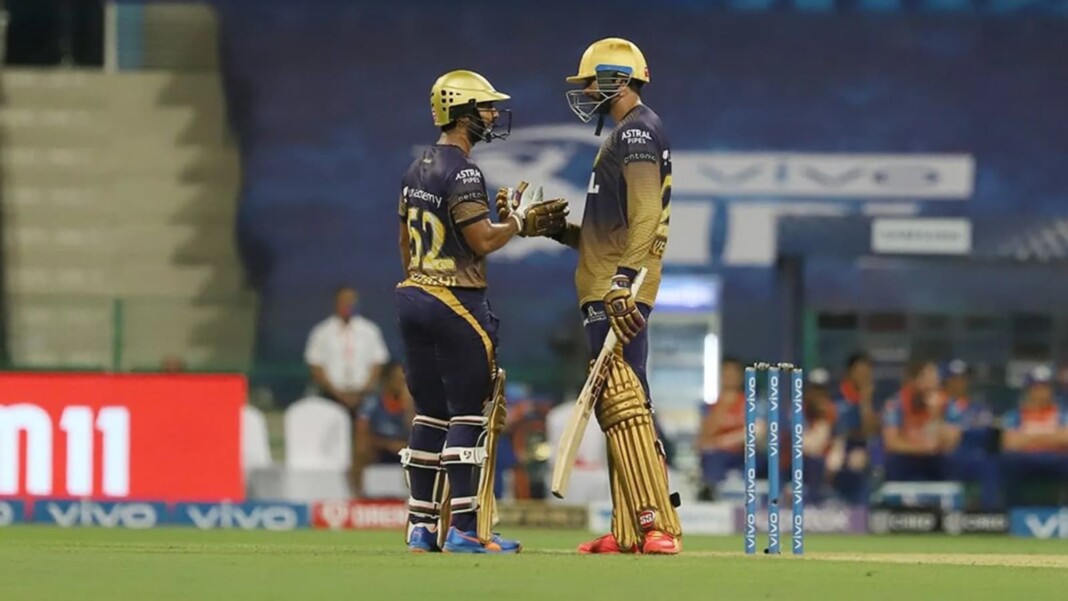 Kolkata Knight Riders continue their fine run in the second phase of the 14th edition of the Indian Premier League. In their first match in the United Arab Emirates (UAE), the Knight Riders got better off Royal Challengers Bangalore by nine wickets. This time around it was defending champions Mumbai Indians who were crushed by a dominant KKR.

The Eoin Morgan-side were again at their fluent best with the willow while playing against Mumbai at the Sheikh Zayed Cricket Stadium in Abu Dhabi. The mouth-watering contest between the two sides kick-started with the KKR skipper winning the toss and inviting Mumbai to put the total on the board.

Batting in the first innings, the defending champions got off to a blistering start as they added 78 runs on the scoreboard for the first wicket. Mumbai’s batting line-up looked in control for the first half and the team was heading towards a big total. However, the wicket of skipper Rohit Sharma in the 10th over caused a collapse of MI’s batting unit.

The entire MI outfit collapsed like a pack of cards and they ended up with 155 runs on the scoreboard in their 20 overs. Lockie Ferguson and Prasidh Krishna were the pick of the bowlers for Kolkata as they picked two wickets each.

Chasing 156, the Knight Riders got off to a turbulent start. Though they smashed 40 runs in just two overs, KKR lost their first wicket in the form of Shubman Gill in the second over only. However, what happened after that on the 22-yard pitch will be remembered by the Mumbai bowlers for a long time.

The other opening batter Venkatesh Iyer, in partnership with Rahul Tripathi, caused a massacre on the field. The two batters hammered the ball like anything all over the part as they made a mockery of the MI bowling unit. Iyer ended up with 53 runs off 30 balls while Tripathi scored 74 runs off 42 deliveries.

The exploits by the two batters ensured that Knight Riders won by seven wickets. With this victory, KKR climbed to the fourth spot in the points table by replacing Mumbai Indians.

Also Read: WATCH: Rahul Tripathi reaches his 50 against MI with a leading-edge SIX off Jasprit Bumrah