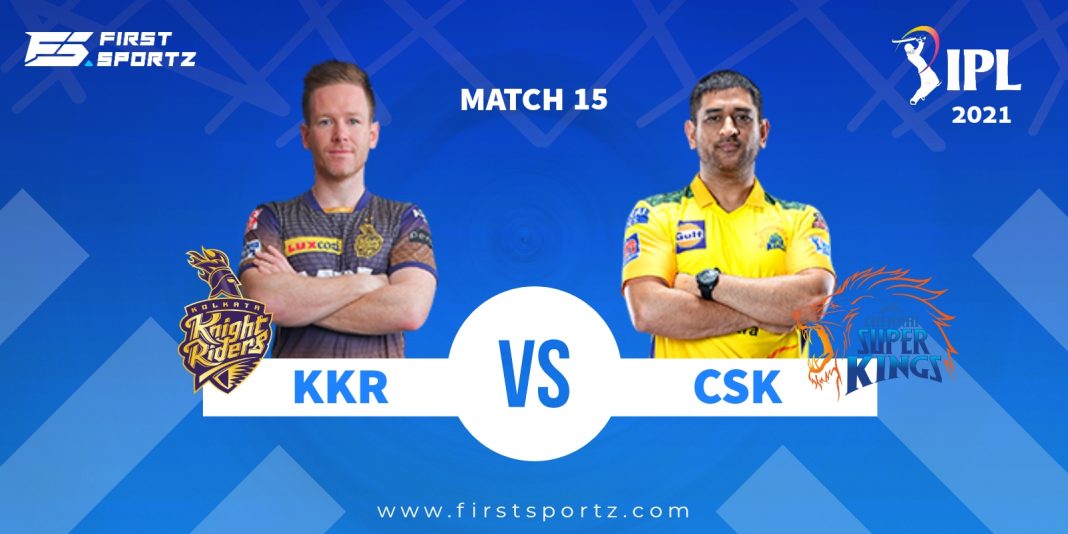 The Kolkata Knight Riders will take on Chennai Super Kings in the fifteenth match of the Vivo IPL 2021 at the Wankhede Stadium, Mumbai on Wednesday, 21st April. It will be the second game of the doubleheader.

The Kolkata Knight Riders have played three games till now, winning just one and losing the other two, including two back-to-back defeats. They would be looking to get back on the winning course.

Kolkata Knight Riders were asked to bowl after losing the toss in their previous match against Royal Challengers Bangalore. Leg Spinner, Varun Chakravarthy attacked immediately, taking two quick wickets, including Virat Kohli’s crucial one. But, the bowlers surrendered as soon as Glenn Maxwell walked onto the field, they were unable to pick his wicket and proved costly.  AB de Villiers, the start player for RCB, also joined hands with Maxwell, thrashing the bowlers all over the park and guiding the team to a whopping 204-runs. Pat Cummins and Prasidh Krishna, in addition to Varun Chakravarthy, each claimed one wicket.

Chasing this massive total, none of the batters stayed on the crease for long and continued to throw their wickets. Andre Russell tried to finish off the game, but Mohammed Siraj was too good with his yorkers as KKR were handed a 38 run defeat.

Kolkata has a great squad but their core players are underperforming and there is no specified role assigned to each player. The team management should try to sort these things out as early as possible.

Coming to the Chennai Super Kings, they have made a strong return after losing the first game and are currently in third place in the points table, having won two of their three games so far.

Batting first against Rajasthan Royals in their last game, Chennai Super Kings scored a compelling total of 188 runs thanks to limited but powerful innings from their batters. The small but effective cameos from Faf Du Plessis, Moeen Ali, Ambati Rayudu, and Dwayne Bravo played a crucial part to guide CSK to that total.

The bowlers did an excellent job in defending this total, limiting the opponents to 143 runs and registering a comfortable 45-run win. Moeen Ali, spun a trap for the batsmen and took three wickets to earn Player of the Match. Ravindra Jadeja and Sam Curran each took two wickets, while Shardul Thakur and Dwayne Bravo each took one wicket.

Overall, it was a complete performance by CSK and they would look to continue the same in this match too.

The weather in Mumbai is expected to be partly cloudy and humid. There are no chances of precipitation. The temperature may hover around 29 Degrees Celsius.

The wicket in Mumbai is known to assist pace bowlers. It will be interesting to see the likes of Pat Cummins, Prasidh Krishna, Shardul Thakur, Deepak Chahar and others bowl on this surface

KKR might bring in Sunil Narine and Shivam Mavi while CSK are likely to remain unchanged.

Chennai Super Kings are expected to win this match. The depth in their batting is their core strength, also added is the fact that CSK have played all their matches so far at the Wankhede. The Kolkata Knight Riders, on the other hand, have not figured out their right combination and there is a lack of clarity in the role of each player.

Also Read: IPL 2021: Graeme Swann weighs in on the new role Glenn Maxwell has adopted in RCB and claims that he is no longer the Big Show