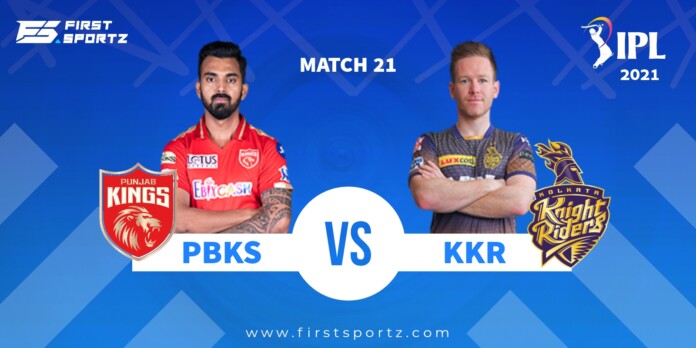 Punjab Kings (PBKS) will take on Kolkata Knight Riders (KKR) today in the twenty-first match of the VIVO IPL 2021 on Monday, 26th April at the Narendra Modi Stadium in Ahmedabad. PBKS are coming off the back of a win while KKR will be desperate to bounce back after four consecutive defeats. This could thus, be a cracker of a contest.

Punjab Kings (PBKS) were in a real spot of bother as they slumped to three consecutive defeats after their win in the opening match against Rajasthan Royals (RR). Both the batting and the bowling looked to be riddled with issues as the side also seemed to struggle with getting the team combination right.

However, a morale-boosting win in their previous match against Mumbai Indians (MI) has set things right. It was a comprehensive win for the KL Rahul-led side against the defending champions as they restricted MI to 131 before chasing down the total with ease, losing just one wicket.

Following the victory, PBKS would fancy their chances of winning two in a row.

Kolkata Knight Riders (KKR) are in a huge spot of bother at the moment as they find themselves rock-bottom in the points table. A win in the first match against Sunrisers Hyderabad (SRH) seemed to promise a good season where they could make it to the playoffs. However, recent form has now put that prospect in serious doubt as the side has been riddled with a plethora of issues.

In the previous match against Rajasthan Royals (RR), KKR’s batting came a cropper as they could manage only 133 runs. While the bowling was not bad by any means, there was a lack of cutting edge in the side as they slumped to their fourth defeat in a row. They would now be desperate to bounce back.

A loss would be yet another crushing blow to KKR and the Eoin Morgan-led side would not want that to happen.

The weather in Ahmedabad is expected to be extremely hot – much hotter than Chennai and Mumbai. Temperatures could hover around the upper end of 30s in the Celsius scale. There are no chances of rain.

The pitches at the Narendra Modi Stadium produced scores in excess of 160 during the T20I series between India and England. There could also be some purchase for the spinners. Teams winning the toss would look to bowl first.

Both teams could remain unchanged for this match.

IPL 2021: PBKS vs KKR – Head to head and Match Prediction

Kolkata Knight Riders will be a desperate for a victory here and a loss would put them in a position of crisis. With a change of venue, the side would look for a change in fortunes as well. If they can deal with the Punjab Kings’ top order, it would hold them in good stead for the match. KKR might thus, edge out PBKS today.

Also Read: IPL 2021: Ravichandran Ashwin to ‘take a break’ from tournament to support family during fight against COVID-19