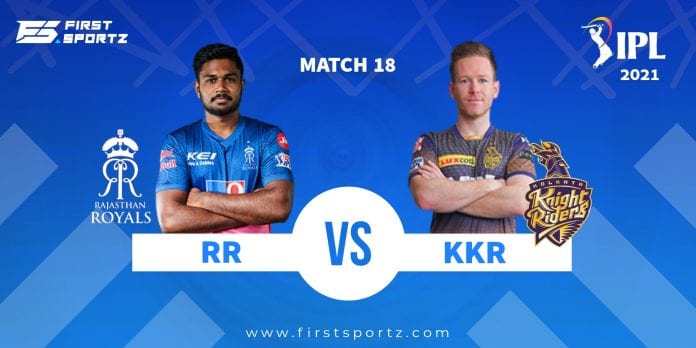 Rajasthan Royals (RR) will face off against Kolkata Knight Riders (KKR) in the eighteenth match of the Vivo IPL 2021 on Saturday, 24th April at the Wankhede Stadium, Mumbai. Both the teams are coming off the back of a loss in their last match and would look to make a strong comeback.

RR have lost three of their first games and are placed rock-bottom on the points table. Things can change very quickly in the IPL, but at the moment, RR look far from a side that can challenge for the title. Injuries and pull-outs from their overseas stars haven’t helped their cause either as the side is currently in a mild spot of bother.

In the previous match against Royal Challengers Bangalore, the top-order collapsed completely despite the fact that the wicket was a batting beauty. Further, the bowling attack was not able to pick up a single wicket as Virat Kohli and centurion Devdutt Padikkal pummeled them around the park.

Having lost two matches in a row, RR would desperately want to turn it around today.

KKR have also had a similar story to RR as they find themselves in the 7th spot, just ahead of their opponents for today. The Eoin Morgan-led side has been unable to get any sort of consistency going as they have now lost three matches in a row after winning the first encounter against Sunrisers Hyderabad (SRH).

In the previous match against Chennai Super Kings (CSK), KKR’s bowling and fielding were not up to the mark in the first innings before a horror show from the top order followed. A stunning effort from Andre Russell, Dinesh Karthik and Pat Cummins however, helped the side to get near CSK’s target before agonizingly falling short.

A fourth consecutive loss would lead to a crisis for KKR and they would want to avoid that with a win today.

The weather in Mumbai is expected to be partly cloudy. There are no chances of precipitation. The temperature may hover around 30 Degrees Celsius.

The pitch at the Wankhede Stadium has produced run-fests and it would be no surprise if we see another one. On occasions, the pitch has produced swing and spin as well and if that is the case, the bowlers would get into the games. Team winning the toss would most likely opt to field first.

Harbhajan Singh might come back into the line-up today instead of Kamlesh Nagarkoti. Despite their loss in the previous match, RR might back the same 11. If there is a change, it would be Yashasvi Jaiswal instead of the out of form Manan Vohra.

Kolkata Knight Riders will be the favourites to win this match. Despite the fact that they are on a three-match losing run, they showed glimpses of how good they can be in the previous match. On the other hand, RR’s problems look a bit more marked and hence, they would find it difficult to get past KKR.