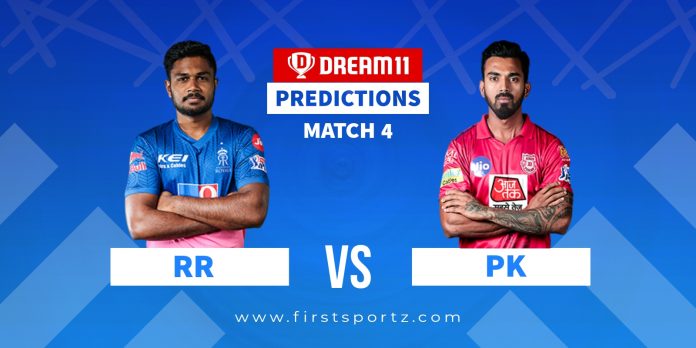 The 4th match of Indian Premier League (IPL) 2021 will see Sanju Samson-led Rajasthan Royals (RR) locking horns with KL Rahul’s Punjab Kings (PBKS). The two sides will face each other on April 12 (Monday) at the Wankhede Stadium in Mumbai.

Let’s look at our fantasy 11 predictions for this clash and here are the top picks for RR vs PBKS.

After a miserable run (last position) during the previous IPL season, Rajasthan Royals will look to start fresh in 2021. RR will take the field with a new skipper as Sanju Samson is set to lead the side after the departure of Steve Smith. They have also added some decent players like Chris Morris, Shivam Dube, Liam Livingstone and Mustafizur Rahman to their squad during the auctions. However, the Rajasthan-based franchise suffered a massive setback after Jofra Archer got ruled out owing to an injury.

Punjab Kings (earlier Kings XI Punjab) too failed to qualify for the playoffs in IPL 2020. However, they won some exciting matches but couldn’t edge past the bottom four line. PBKS was one of the most aggressive teams during this year’s auctions as they roped in some expensive buys to their squad. Their top picks include Jhye Richardson (INR 14 cr), Riley Meredith (INR 8 cr), Shahrukh Khan (INR 5.25 cr), Moises Henriques (INR 4.2 cr) and Dawid Malan (INR 1.5 cr).

Here are our three picks for probable Dream11 Fantasy captain for RR vs PBKS:

Here are our three picks for probable Dream11 Fantasy vice-captain for RR vs PBKS: